Ricky the Wolf Wonder by AbandonedTeen 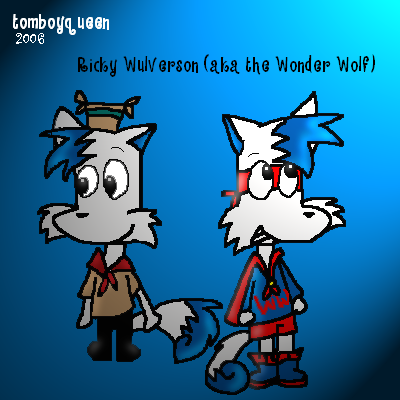 Okay, brand new Camp Lazlo OC alert! Brand new CL OC alert! 8D
His name is Ricky Wulverson and he's a white wolf with blue streaks on his truffs of hair and tail with a strange thing...
HE'S A SUPER HERO!!!! *Insert heroic music here* Da da da da daaaaaaaaaaaaaaa!!! XDDDDD
Yes, Ricky is a bean scout to hide his secret identity, for if anyone found out about this, his evil arch nemesis (which I might create later ^^;) will hurt his friends and family. Also, only his parents and Jelly Cabin knows his super secret. And they don't tell anyone...*Shh*

Here's his description:
Age: 10
Gender: Male
Species: Wolf
Eye color: Used to be only yellow, but now they're sometimes blue
Scout: Bean scout
Super hero name: The Wonder Wolf
Super powers: Super strength, super speed, flying, and shoots beams out of his eyes. *wow*
Costume color: Blue and Red
Description: A white wolf with blue streaks on his hair, ears, and tail (He was not born with it, though. I'll tell you very soon why...) and wears either a bean scout uniform or his superhero clothes.
Likes/Loves: to read comic books, Bonnie (another CL OC I will post later), saving the day, Jelly Cabin, using his powers to make a fool out of Scoutmaster Lumpus *giggle*, the squirrel scouts fangirling over "Wolf Wonder", etc.
Dislikes/Hates: Edward, Lumpus, having his comic book confiscated (taken away from him by Lumpus), when somebody tells him that he looks a lot like "Wolf Wonder" (some people may be suspicious about this), etc.
Bio/Story: When Ricky was little, he didn't have super powers or those blue streaks, until he came inside his parent's lab one day (Yes, Ricky's parents are scientists). His parents was thinking of getting rid of a bucket of toxic radioactive sludge and then they left the lab for a little while. Ricky came closer to that bucket and the slime spilled all over him. Luckily, he survived and got super powers. His parents were surprised at this and ran a few tests for him. And they found out Ricky now had the strange abilities. It took him a few years to master them, though. Then, at age 10, Ricky was sent to Camp Kidney for the summer. He made friends with Lazlo, Raj, Clam, Carmen, and Devon. When they found out he had super powers, they swore to keep it a secret. "Wolf Wonder" is famous, so a lot of people say Ricky looks a lot like him (That's because Ricky IS "Wolf Wonder", duh!). That makes him nervous, which makes some people like Edward suspicious. >.> Ricky has a crush on a new CL OC I'll make soon, named Bonnie. And when Ricky hears a cry for help, he springs into action by hiding in a bush or something and change into his costume very quickly and become "Wolf Wonder". So that's pretty much Ricky Wulverson in a nutshell! XDDDDD

(P.S. He kinda reminds me of Krypto the Super Dog, huh?) :D
If there's not enough info on Ricky, ask me a question and I'll answer it ^^

YAY! Ricky looks cool I like his hair! ^^ MEH FANfICIE IS UP READ IT PLZ! http://www.fanart-central.net/story-38933.html OH did I mention? *FAVES*