So Alone, Be Sorrow

So Alone, Be Sorrow

So Alone, Be Sorrow by AllisonPO 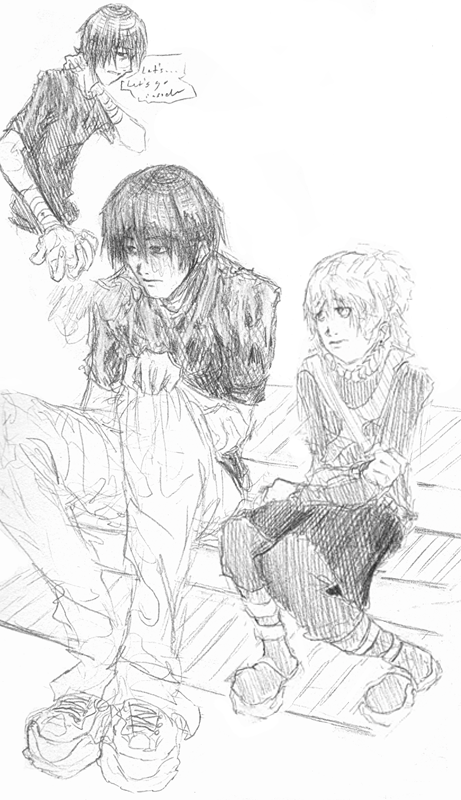 It was raining. Not so much that that would generalize everything to be said, just a statement. It wasn’t even raining hard, but not light, either. Just enough to make you wet if you stood out for a good enough time. It was cold, though. Mind-numbingly cold.
Not that Shinya needed his mind to be numbed. Not that Shinya really needed anything, actually. He was simply content with sitting on the lowest step of his outside porch, staring at nothing.
“Shin, mommy says to come inside now,” said Claudia nervously from behind the screen door, her thumb precautiously located near her lower lip.
She twirled her fingers around the cold door handle when he didn’t give any indication of hearing her.
“Shin…?”
Her hands started to tremble when yet again he refused to answer.
She knew in her heart that he didn’t mean to be the fearsome spectacle that she took him as, but whenever Claudia was near Shinya she felt like she was going to be swallowed whole. She refused to look in his eyes because they were so…empty. Unable to form words, she’d find herself sitting next to him from time to time, just waiting for him to explain everything she couldn’t understand.
She opened the door slowly and spun her slender body around the frame, making her way the step Shinya sat on. She flinched when she felt the frozen droplets of rain from the sky, but determinably sat on the wet concrete and clutched his drenched t-shirt.
“Shin…you have to come inside,” she pleaded.
“…”
“You…you’re not supposed t-to be alone anymore, remember?”
“…”
“T-that’s what the doctor said…”
“…”
“…can you…even hear me…?”
His eyes continued to glaze over, his silence speaking nothing but his now ever-present pathetic disposition.
Claudia’s eyes started to mist over, which startled her oddly. She thought she was used to this, but she wasn’t. Maybe it was because the doctor and her mother said that he was better now. Maybe it was because her father promised her that her brother would be back soon. Or maybe, truly, it was because she knew that Shinya only acted this way around her. The way he truly felt…even if it was nothing, it was still him. And yet…she was scared of him. She felt horrible.
Her sobs increased and she desperately tried to keep her brother from noticing.
But he did. She saw him, just by chance and out of the corner of her eyes, swing his glance at her for a mere second, then turn back and shut them.
Before she knew what happened, she had her arms wrapped around his waist, head pressed against his chest as she cried as hard as she could ever remember doing. Her thick tears were lost among his already soaked shirt but they left their mark.
Shinya simply sat still.
Gaining control over her psych. Claudia removed her self from her brother’s vicinity, sitting as far on the edge of the step as she could, breath hitched every few seconds.
“…Claudia…?” came Shinya’s husky, forced voice from beneath the shadows of his hair.
A small shriek was emitted from her throat as she hesitatingly contemplated looking at him.
“…Y-yes?”
He paused, whether by fear or contemplation she didn’t know, but he sat there for a good few silent moments, the refraining rainfall stealing the conversation.
“Let’s…go inside, okay?” he muttered nervously.
Wait…nervously. Claudia’s eyes widened at the realization struck her in the heart. She turned quickly to face him, meeting an unsure, sad-faced little boy. Simply a child who had no idea what to do or what to say. If she didn’t know any better, she’d think he was younger than her.
He stood up quickly, his left hand immediately grabbing his neck and digging his nails into the flesh.
It was a habit Claudia had long since gotten used to. After that, he’d stuff his right hand into his pants pocket and walk away.
This time, though…he held it out for her. His eyes were cast aside, as if scared of this simple show of affection. She could see small tremors taking over his body and wondered vaguely how long he’d been outside.
She took his hand firmly and they walked into their house.
__________________
Completely forgot I wrote this until I found it randomly on my computer last night (it has to be at LEAST a year old, most likely more). I guess it stuck with me 'cause I ended up doodling based off it during church today.

This would be fairly soon after Shinya is let out from the hospital for his 'suicide' attempt (hard to explain). Claudia is his little sister. He'd be 15 in this pic, she'd be...5-6? I dunno'.
__________________
Mech. pencil, Photoshop to enlarge Claudia a tad (I drew her waaaay too small).
Title is a song from Star Ocean 3 that's currently blaring out of my speakers.
Shinya, Claudia © Me

Seriously, man. I love your writing, and this is just such a short little sample!! Please please please???? It's awesome stuff!! Goodness, I love the way you described the actions, and the voice and details and... *__________*

SUBMIT IT.
(I swear I'm not threatening or anything, oh no, of course not. XD )

Anyway. Back to our regularly scheduled programming...
Once more, I adore your art as well. The poses express the characters' feelings so well, and I love those gosh-darned scribbly lines of yours. For some reason, I really like both their legs and shoes here. 8D;

B-but I haaaate them. D: My writing skills have slowly vanished over the years (probably 'cause I never write anymore). Berhgleherz....fuuuumaybe. *_*

But yes, the regular: I've become quite obsessed with drawing long, lanky limbs as of late...and shoes are sooo much fun to draw, even if I always draw the same ones...

Shinya = <3 He was my second OC. If you remember Daikuru at all, these two are friends~

I LOVE your writing, dear. Really. JUST DO IT. D:<

Also, I forgot to mention, but I went hype!hype!happy at the title to this.

OMG, IT IS SHINYA AND CLAUDIA! =D
And she looks about 8 or so, at least. You never really did settle her age, did you?
And yay. I never knew that story was just after the hospital released him. Maybe I really ought to have guessed? ._.;;
Bah. Anyhow, are you still thinking about killing Claudia? Just something I remembered.
AND OMGYOUDREWSHINYAYAYA
I see his hair has morphed once again. Or, on more thought, it's just wet from the rain. ._.;

No, I never finalized it. But in the real picture she's MUCH smaller; it just didn't seem natural enough to me in hindsight so I altered it before uploading it. I say maybe she's 7? When do kids normally stop believing in monsters under the bed, anyway? Could always peg her as a scardy-cat, though...

And I swear I tried to keep his hair the same, but yes, it is matted down by the rain. It...should be the same. (The same as WHAT, though...?). I NEED TO FINALIZE HIS DESIGN, DANGIT.

Fanalize him? He's far too disagreeable for that. But good luck to you.