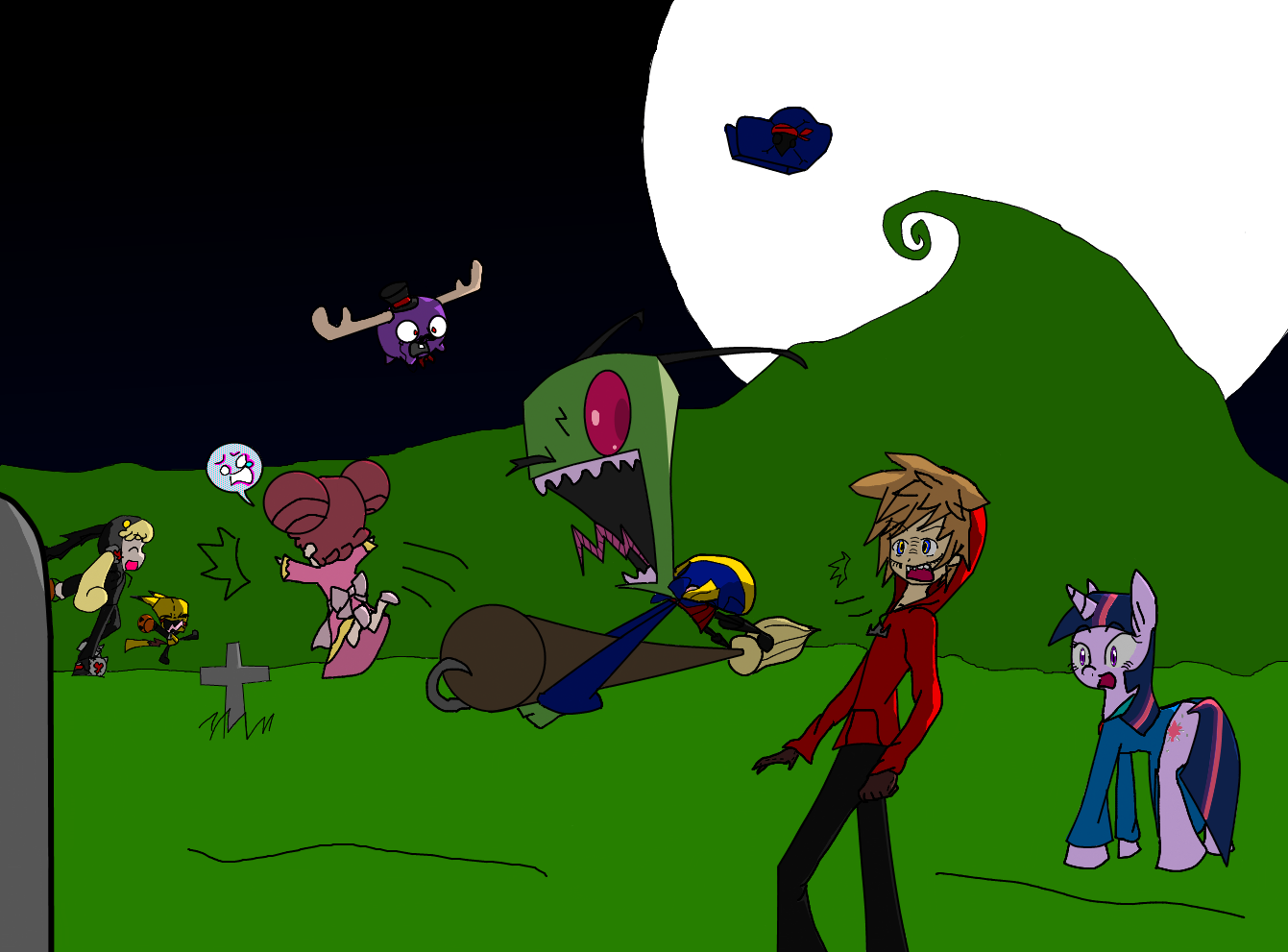 (AAAAAAAAAAAGGGHHH!!! I HAVE TO WRITE THE @#$%^ING DESCRIPTION ALL OVER AGAIN! CURSE YOU FAC FOR NOT ACCEPTING PAINT.NET FILES!!)
FINISHED!! *falls over*
This is also a scene for a almost-written story called KiNGDoM CRaCK. (any better ideas? Name them.)
What's going on? Well, Zim mentioned Halloween and Twilight called it Nightmare Night, and the two argued about it on the way there in the Gummi Ship. When they landed, Jack met up with them (Hana screamed at first sight of him) and told them that there was a costume contest being held that night, and that they should join; they did. Sora is dressed the same way that Gumi is from [ http://www.youtube.com/watch?v=_JGaQ3g8WU4 here http://www.youtube.com/watch?v=_JGaQ3g8WU4 ] , Doremi is Sakura from Tsubasa, Hana is a Heartless, Gir's pikachu, Zim is a pirate, and Twilight is... I don't know. A vamp-pony? And about Spike... he's Phantom from the Opera. XD Why? Because I can, that's why.
And what's happening here is that Zim found a broom stick and decided to try it out. Bad idea because he crashed into a tombstone and it fell on top of him. He's alright, though.
NOW FOR DISCLAIMERS!
Sora (C) Tetsuya Nomura, Square Enix, and Disney.
Zim and Gir (C) Jhonen Vasquez, Nickelodeon, Viacom, and whoever else owns him.
Hana and Doremi (C) Toei Animation.
Twilight and Spike (C) Lauren Faust, Hasbro, and the HUB.
Aaaaand done! XD wheeee
(edit: AAAAGHH MY LINK THINGY DIDN'T WORK PROPERLY! HELP?!)
Also posted on deviantart.

Comments 16
Media Other digital art
Time Taken LOST TRACK!
Reference One for Twilight, one for PikaGir.

Thanks! (I really need to check the comment things more often...)

This is really neat! I love the collaboration of characters.

AHHAHA Zim looks like he is having the time of his life- or is that fearful screaming I see/ *shrugs* Oh well, it is all the same! :P HHAHA yeah, it is always good to submit pure picture (jpeg, png, etc) files instead of the actual program file. I have used Paint.net before! It is a neat, clean program! I am quite suprised this is Paint.net, because you make everything so smoothly colored! I must render my Paint.net drawings the same quality as yours!

I adore the perspective of the flying broom and the freaked out people! I spot Twilight and Sora! EHHE Nice work! This work HAS been added in! Thanks a lot! You will find out the winner....4 hours from now. xD EHHEHE!

Zim's most likely screaming because he can't control the broomstick. And thank you! XD

GAAAAH sorry about deleting your comment! It was an accident! DX( Dangit why?!