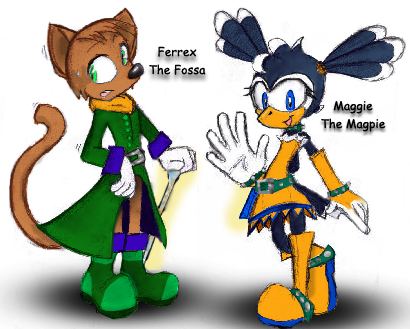 After a long time I'm getting back on the Sonic train with my character Beyond the Beast and now with her two friends:

Ferrex is a smart but cowardly Fossa, who is next in line to take over this father's throne, but it seems that his brother Porrex is eyeing the throne for himself and would kill Ferrex to get there. Instead of confront his brother, or waiting for a tragic Shakespearian end to his life, he decides to run away with Beyond and go to another dimension hoping to flee from his bother's plight. During the escape Ferrex took a Rod that (unknown to Ferrex) is a key to a powerful treasure/weapon that Porrex is after. Knowing that his brother is going through time a space to kill him, left Ferrex a paranoid wreck and has a hard time trusting anyone. He's not really strong, so he uses the Rod to protect himself and as a coward he's a descent runner but in the event when he's SCARED he can give Sonic a run for his money. Beyond and Maggie need to hold on to his tail or they'll lose him on the other side of the world.

One day Maggie the Magpie flies around in the skies at ease away from the troubling world below, then she crashes right into a Beyond and Ferrex's spaceship. When she comes to, she had lost her memory. The only clues to her past is from her recently started Diary that she always keeps by her side. Although the book is half a page long, she finds her life boring and sad. So she decides to start a new life by helping Ferrex and Beyond get around on Earth. She is now carefree leaving her own worries behind her. Maggie is your literal airhead, her flying skills make up for her lack in common sense but far from make up her abundance in kindness and compassion.

Ferrex and Maggie together:

...Well it's Brains VS Lack-of-Brains. Ferrex can't cope explaining High Tech Machinery to Maggie, he rather save his brother the trouble and hit himself over the head with a monkey wrench. The only time Maggie's feathers are ruffled is when Ferrex refuses to trust her, as she is trying REALLY hard to be his friend. Most of the time, Beyond needs to get between them so they can calm down and get back on track. On the plus side, They introduce each other to their different life styles to one another, and Maggie dose manage to make Ferrex laugh and brings out a rare smile to his face