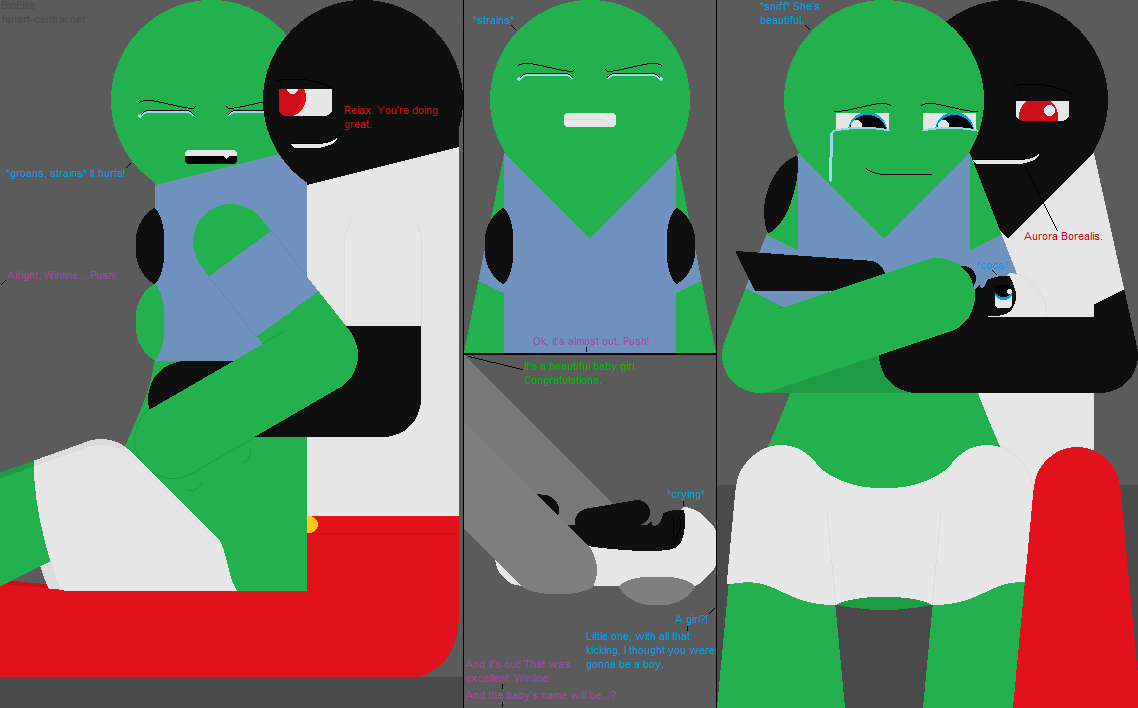 Winline strained. Giving birth is a lot harder than I imagined. Winline thought, groaning as he forced the baby out of him. "You're doing good, Winline, just keep up with me.", Jn said with a smile, his purple eyes glimmering with encouragement. Winline felt another contraction, and somehow Jn must've sensed it. "Alright, Winline... Push!", he barked lightly. Winline groaned loudly, straining in pain with tears in his eyes. "It hurts!", he cried out as he rested his head on Shadow's right shoulder, squeezing his eyes shut. "Relax. You're doing great.", Shadow said with a reassuring smile while gently rubbing Winline's stomach, slowly easing the pain. Everytime Winline had a contraction, he would push hard enough to force the baby out but not harm it in the process. "Ok, it's almost out. Push!", Jn declared, which made Winline give one last push before his sky blue eyes flew open and gasped at the sound of the baby crying. "And it's out! That was excellent, Winline.", Jn congratulated, purple eyes filled with joy. Klo cut the umbilical cord, wrapped the baby in a towel and gently rubbed it dry before handing it to Winline to see. "It's a beautiful baby girl. Congratulations.", he smiled, handing the baby over to the happy yaoi couple. "A girl?!, Winline was shocked. He thought that the baby was going to be a boy due to its kicking during labor. "Little one, with all that kicking, I thought you were gonna be a boy.", he smiled lovingly. Klo gently laid the baby into Winline's arms, smiling as the baby's crying ceased when her sky blue eyes took in the faces of her mother and father. Winline couldn't fight the smile that grew on his face, giving a light laugh as the baby cooed in curiosity. "She's beautiful.", he sniffed, tears of joy streamed down his face as he stroked the baby's tiny hand with his thumb. Jn couldn't be more proud to have delivered this couple's baby, smiling as he watched her eyes move from the mother to the father and back. "And the baby's name will be...?", Jn asked curiously, thinking it was going to be something simple, like Sabrina or Elisabeth or Amanda. Shadow looked down at his daughter and smiled when he saw her staring at him with wide eyes. Two words escaped his mouth as he kept his gaze on his daughter: "Aurora Borealis."

Story above is headcanon, and it belongs to me.
Shadow and Winline are now officially parents! X3
This was fun to make, and I'm glad I did it XD
Omfg, the baby's sooooooooooo cuuuuute!!!! X3 I think I might die from the cuteness! X3
​Anyway, hope u enjoy it! XD
Shadow, Winline, Jn, and Klo belong to PinkBlueY, not me!
Aurora Borealis(the baby) is my OC and belongs to meh XD And yes, I named her after the Northern Lights.
Gah, I'm never gonna get over how cute the baby is! XD