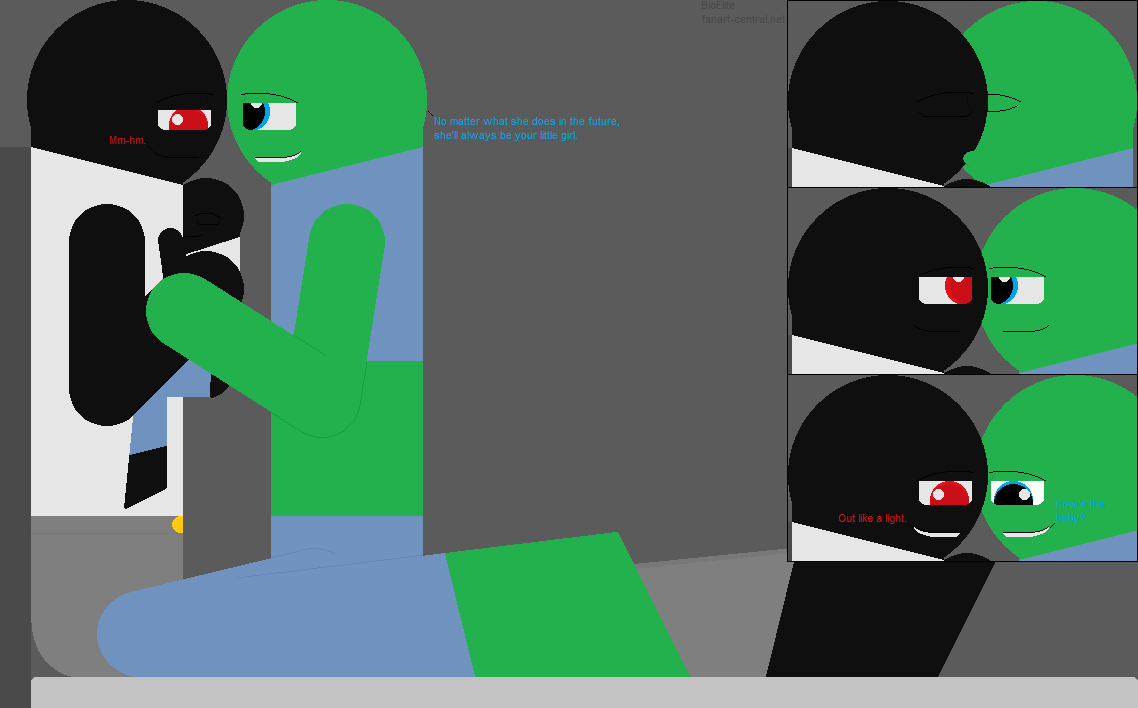 Winline pulled into the garage of Shadow's mansion. As he got out of the silver 2013 Volkswagen Beetle, he wondered why his mate and the baby haven't come to welcome him home. He opened the door and smiled at the sight of Andy and Jake, Shadow's twin cousins, wrestling in the living room. Lauren, Shadow's mother, came in and broke up the little match the twins were having, and smiled at the sight of Winline. "Welcome home, sweetheart.", she said lovingly, leading Winline to the kitchen as the twins started up their wrestling match once again. "Where's Shadow? I haven't seen him when I pulled in.", he asked with a worried tone, thinking that Shadow was too busy with helping Aaron, Shadow's father. Shadow's mother laughed, pointing at the ceiling, "He's in Aurora's room. He said that she was having trouble taking a nap, and thought he might fix it." Winline climbed the stairs, his feet barely making a sound on the velvet carpeting on each step as he headed straight for Aurora's room. Winline wondered how long his daughter has had trouble napping, but then stopped in his tracks when he heard the familiar sound of Shadow's voice. Sitting on the bed, Shadow held Aurora to his chest, gently rubbing her back in the hopes of helping her fall asleep. To his relief, he saw her let out a yawn and smiled as her sky-blue eyes started to get heavy with exhaustion. Shadow continued to rub his daughter's back as he sung 'You'll be in my heart' by Phil Collins. Aurora gave a final yawn before her eyes closed, her breathing slowed as she fell deep into sleep and a smile grew on her face as Shadow stroked her cheek with his thumb. "Pleasant dreams, my beautiful Rose.", he said lightly, kissing the top of her head with a smile. He looked up just in time to see the bedroom open and his eyes softened when Winline walked in and sat on the Ender Being's legs. He leaned forward and kissed his mate, fighting back the urge to blush every time he would kiss Shadow. Both their lips parted as they stared into each other's eyes, smiling. They then looked at the baby sleeping in Shadow's arms, their eyes softened as they watched her shoulders rise and fall with every breath she took in her deep sleep. "How's the baby?", Winline asked, his voice barely loud enough for his mate to hear but soft enough to not wake up Aurora. "Out like a light.", Shadow replied, a faint smile on his face and love in his eyes. Winline laid his hand on Shadow's arm, focusing his attention back on his mate with eyes filled with confidence. "No matter what she does in the future, she'll always be your little girl.", he commented, resting his forehead on Shadow's whilst looking at him. Shadow nodded lightly, rubbing his cheek on Aurora's head lovingly.

Story above is mine.
Shadow and Winline belong to PinkBlueY, not me.
Aurora Borealis belongs to me.
Aww, the baby's sleeping! Sooooo cute! X3
​Gah, Aurora's so tiny! XD Jk, she's the normal size a baby would be XD