The doctor by Blade 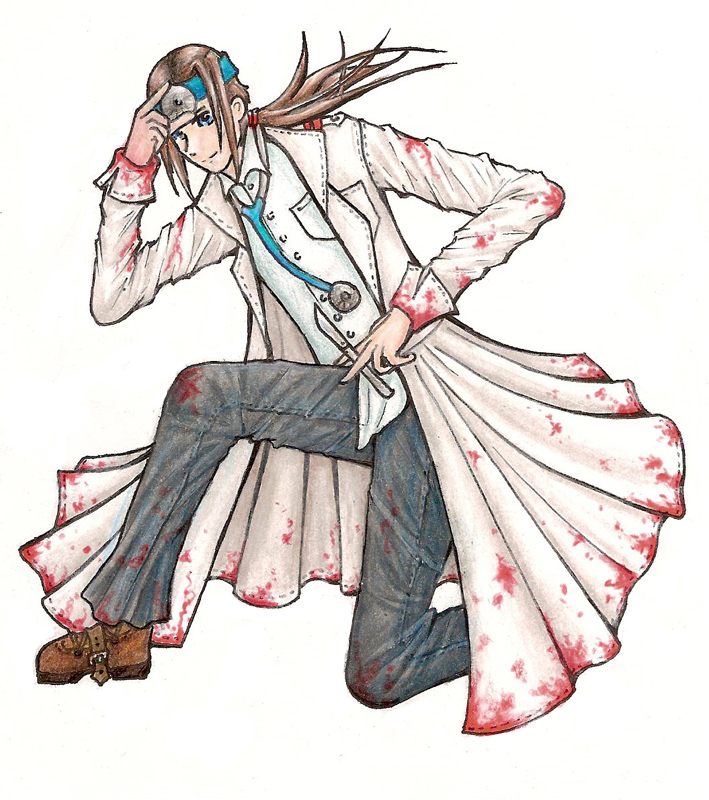 The Doctor is my most recent roleplay character for a Savage World's campaign.

Usually I make my own characters completely, but I take no credit for this design. A friend of mine actually came up with it.

In short, The Doctor is the only name this character has...well, for this instance at least. He is a combat surgeon and can throw scalpels, and can preform medical miracles! Hoary!

Actually...we have no idea if the doctor is a boy or a girl...I always figured he was a guy, but my friend who made the character always thought he was a girl...so I tried to make him...her...it? androgynous, but I just ended up with a ridiculously anime picture. >.<

Anyway, this is something I drew for fun to kind of keep my sanity. I think it's the most useful thing I have done in the last three days.

which inspired me to draw this.
I wanted to work on some of the other stuff I needed to get done, but I was too out of it to be confident in my ability to draw.

I really don't want critique on this, mainly because i was feeling like garbage and on painkillers when I drew it. Then I was feeling even worse today when I finished it! Yay! Yeah...this is my attempt to keep myself sane right now.

Hah, your charachter is exactly like the one I came up with...ALthough he's in a D20 medern Campaine.
I like it a lot, the jeans are really realistic.

Lol, nice. :D Personally this character kinda reminds me of Black Jack too...which is one of the most awesome characters ever!

And thanks! At first I never meant for them to be jeans, but it just worked.

Cool, nice pose and folds! :D Good job on the blood too.

I think it's very well drawn :) I love the pants.. the texture is soooo cool :3

I have to favourite this.. it's just wway too awesome!!

Lol, thanks! :D
I think he's definately a boy here...I kinda gave up on making him look more girly after a while. XD