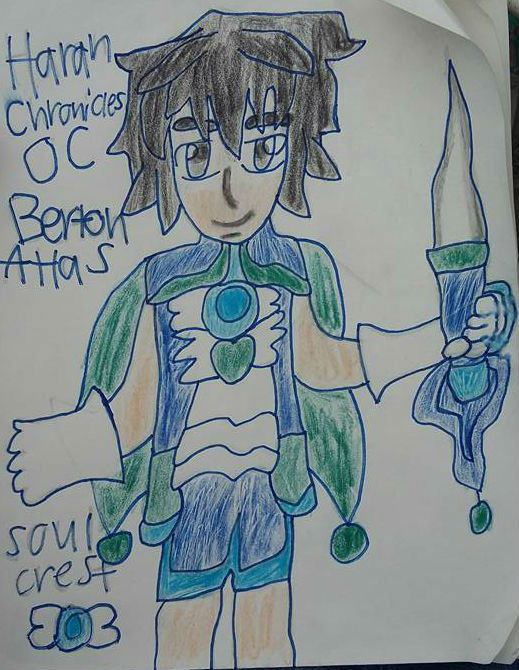 Name: Berton Atlas
Race: Human
Age: 15
Catchphrase: “On my honor as a musketeer!”
Personality Type: ISFJ
BIO: Berton is a transferred student from Raz, who has moved to Haran Academy School.
When Staramy introduced herself to Berton, he was intrigued about her, from her appearance. Berton asked Staramy if she wanted some lovely dresses from his new house, since he didn’t want them anymore and that it would look good on her. Staramy neutrally accepted his offer.
At lunch time, Berton wanted to sit at her table, so he can make new friends, thinking that Staramy would be a potential friend of his. Staramy asked him why he was sitting next to him. Berton nicely replied. “Oh, s-sorry! I wanted to make new friends, and I thought you’d do the honor into making a conversation with me.” Staramy gave a small glare at him, since he was originally from Raz, the rival of Senshi. “I don’t know if your spying on me, or that you really want to specifically talk to me, in order to follow your schedule correctly. I really don’t trust you to become my friend anyways, so git!” Staramy said to him. “Why are you doing this to me!? I’m not a threat to any of you! Please calm down!” Berton panicked. But Staramy still did not believe him.  “No. I still don’t trust you buddy. So get out.” Berton cowardly ran away with his tray, moving into a different area. But heard Staramy’s conversations about Reiko being dead.
While Staramy and his friends seached for a labyrinth, Berton was unknowingly following them. While everyone came inside the labyrinth. Staramy looked behind her and saw Berton following her. “WHAT ARE YOU DOING HERE STUPID!? GET OUT OF HERE, YOUR GONNA DIE!” Staramy warned him. “I know what these are. There Mary Sue labyrinths, I was an excellent fighter at Raz, serving Mr Joy as a protective soldier and a retainer at the same time. So please, accept my help and I know you can trust me!” Berton answered. Staramy finally allowed him to help out.  But only once. “Just this once ok?” Staramy said.
Along the way, Berton was doing all of the work instead of everyone else. Killing many monsters as much as possible. Who had also successfully killed the Sue, in less then 1 minute.
Staramy and the others were impressed at how fast he was at fighting. “Dude, you are really fast. So thats why Mr Joy recruited you.” Staramy said amazed. “Thanks. I usually work independently, but I’m not alone now. Now that I have more people fighting for me!” Berton said awkwardly in sweat. “Dude, you seriously need to stop acting so socially awkward and sweaty all the time. Relax for once.” Staramy offered, because she couldn’t stand him being awkward and sensitive all the time. “Thanks! I would love to relax for a while, I was always terrible at social interaction when I was a kid. I did not have any friends because of this!” Berton explained.
“Then chill the frick out and drink some Vanilla Whine, when we get back.” Staramy politely said.
When they went outside at Staramy’s house. She offered Berton Vanilla Whine. Houlihan opened his door, looking at Staramy’s Vanilla Whine she was holding, angrily asking. “STARAMY! Where did you get that Vanilla Whine? I was wondering where that was! I can’t believe you stole that from me!” Staramy replied. “But Houlihan! Its for Berton! Your getting real salty today! Want some pepper to go with it?” “No I don’t care about your STUPID jokes! Give me that right now!” Houlihan yelled, snatching Staramy’s Vanilla Whine he owned and peacefully went back to his house. “Whats up with him?” Berton asked. “Thats my neighbor Houlihan, he’s such a nice guy!” Staramy explained. “Well, he seems like a really angry guy.” Berton assumed.
Berton is a very socially awkward person, almost making things impossible for him to ever make any friends. He was diagnosed with Socially Awkward Disorder when he was 9. He has had this since he was 7.
Berton and Jenrid are mortal enemies, mainly because they are evenly matched on who is the better Musketeer. Jenrid was stabbed so hard, that he has a bloody scar on his stomach. Now he is looking for Berton, to get his revenge on him.
Besides his disorder, he is an excellent helper when it comes to his friends and partners. Having an undying support for them as much as possible, without any regrets whatsoever. But when he sees blood, or anything thats gory or brutal, he will instantly freak out, running away from the situation as far as possible.
Abilities: His Rapier is very sharp, cutting through flesh, wood and even the hardest things such as steel. The Rapier is built with fire inside of it, making the reason why it can cut through steel. A very hot weapon to touch if used properly.

The solution to Berton's gore problem when fighting, is that Berton uses his blindfold he keeps him at all costs when he is fighting. Since he has an excellent ability of sensing future attacks and prediction blindly, that way he won't see any blood or gore at all.

Personality:
Nervous
Supportive
Kind
Brave (When he goes to fighting mode)
Sensitive
Elegant ( His obsession with frills, dresses and classical music)
Paranoid (When seeing overly gory or brutal things)
Stubborn (When things don’t go his way.)
Unforgiving (If anyone does something wrong, he will NOT forgive that person, or  it will take a long time for him to forgive)
Emotional (He is a lot like this when something goes wrong or if something really important in his life happens ETC)