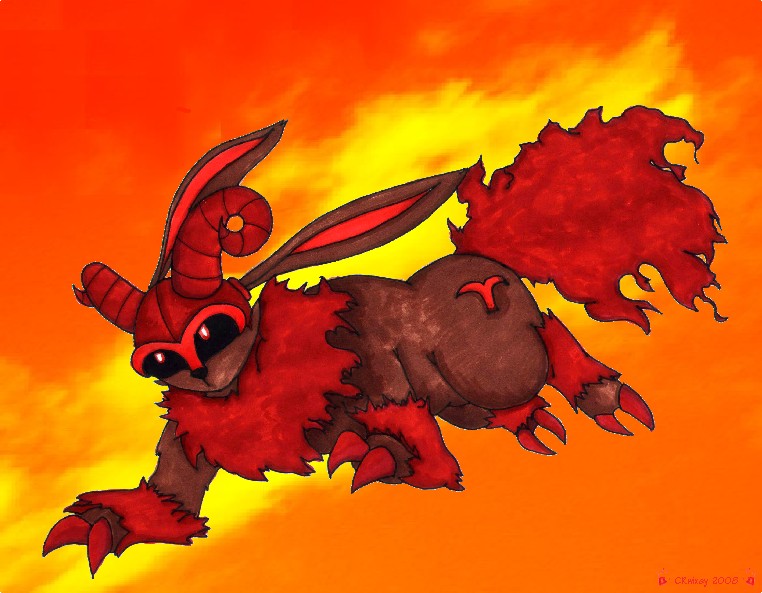 Request for haoasakura7. This is another "Astrological" Eeveelution, based on the first sign of the Zodiac, Aries the Ram. Aries is the Cardinal Fire sign, linked with passion, dynamism and and new beginnings.

Drawn freehand with biro, then inked with a 0.3 drawing pen. Coloured with felt tips; the background was added in Microsoft Photo Editor. Comments always welcome! :)

Evolution Level:Any; Eevee evolves into Arieon if it can gain 5 experience levels or more in under 5 minutes.
Evolved Forms: n/a
Location:n/a
Type:Fire.
Description:Arieon is as impulsive as it is warm-hearted. Trainers who feel they need to be avenged should team up with this Pokemon – they can’t stand injustice. Arieon likes to go all-out during battles, but because it’s reckless it sometimes ends up doing more damage to itself than the opponent. Its head is a particular weak spot; that’s why it always wears a helmet-like apparatus.
Arieon like their battles fast (they hate to waste timing strategising) but they also hate to lose, so Trainers will have to be careful which fights they let Arieon enter. They’re tough, but a Water Type move could still spell disaster as they aren’t particularly good at defending. Extremely fierce and protective towards their Trainers, they’ve also got a soft and soppy side, and they love being cuddled. They also love spicy food, and are especially fond of Tamato berries.

wow... I just Love the firery effect of it's tail, and the horns on it's head.


You have done a great job so far, I have huge expectations from our future Evo's!

lol and P.S.- I am a Capricorn ;)If you catch my drift.
Lol I love my sign!
Capricorns are considered the king of the stars and ruler of Saturn, the planet of ruins and rebirth! I can't wait to see that!

you should should draw the others too

I'm working on them (slowly). Hopefully Virgo and Libra should be up next. :)

Awesome! My mom is an Ares! I'm a Pices XP I love this one; I bet the Gemini and Leo Eevee-lutions are gonna be neat looking!

Aww, lucky! Pisces is my favourite sign, I've always wanted to be one...

Thanks! I'll get around to it sometime, I'm currently working on Virgo. ^^

awesome pokemon, I love the style, I like it more that it's a fire type, 10 POINTS! :3 WHEEEEEE *dose a happy dance* FIRST COMMENT!

I'll start the Virgo Eeveelution next, sorry it's taking so long...