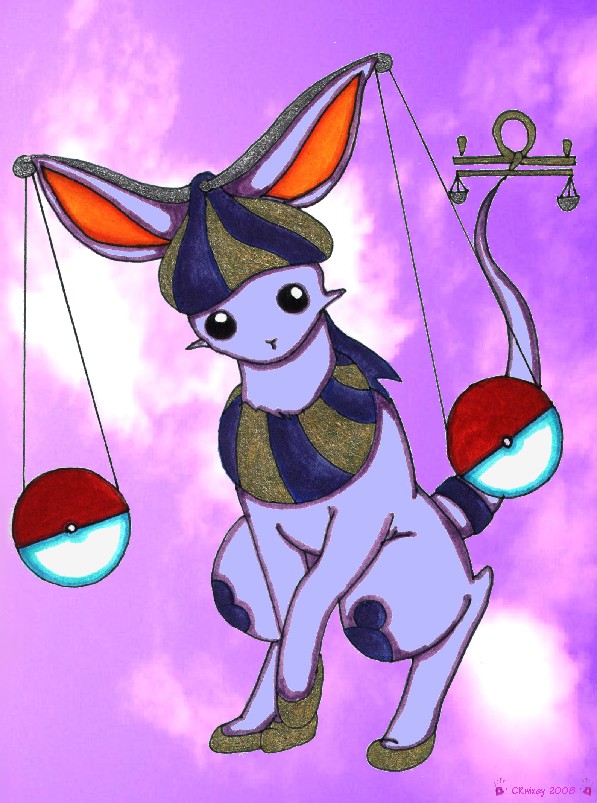 Another astrologically-themed Eeveelution. This one's based on the seventh sign of the Zodaic, Libra the scales. Libra is the Cardinal Air sign, connected with diplomancy, balance and partnership.

Evolution Level:Any; Eevee evolves into Libreon if it uses an equal number of offensive and defensive moves in five battles or more.
Evolved Forms:n/a
Location:n/a
Type:Steel.
Description:Libreon make curious fighters – they never seem quite sure which battle style they prefer. Sometimes they want a defensive role; sometimes they want to deal big damage. Sometimes they don’t want to do either, and are liable to cut fights short with Baton Pass or U-Turn. And they don’t just change their minds once during a scrap, either – sometimes they’ll change it several times in one match. Once they’ve made up their minds, though, there’s no point in trying to tell them otherwise.
Despite their tendency to swing wildly from one extreme to the other, Libreon are charming and wise. They have a sociable streak and love to meet new Trainers and their Pokemon. They also seem to gravitate towards Trainers who have a flair for style and good sense of colour.

aw i love its expression

Thanks for faving it. :)

Are you a Libran?

im a Sagittarius. can you do that one next?

Sure, I'm just about to submit it. Sorry I didn't repsond earlier, I haven't been well lately and I had to attend a Graduation Ceremony yesterday, and it went on forever... hope you like the pic, though. :)

Cool, glad you like it. I was just about to submit the Sagittarius pic, so I'll send you the link. :)

shouldn't the button on the middle of the pokeballs be bigger? also, why is there a / in the description? shouldnt that be a comma?

The Pokeball buttons might have been bigger if I'd used a reference, but that's just the way they turned out.

Thanks for pointing out the text error, I do this annoyingly often as my keyboard's so old the letters are starting to wear off. It's easy to press the key next to the one you want without realising. I should probably check my typing more thoroughly; I tend to be in a hurry even when I don't need to be.

It adorable.
Since my sign is Libra I can relate a bit to the character to described.Anyway,you do a great job on detail and coloring.Have you ever thought about trying to make a pitch to the owners and creators of pokemon?

With your ideas for new pokemon I think you could revamp the whole series maybe create new settings & story lines?

I checked my personal astrology chart online once, and was annoyed to discover I had no Libran influences at all. It's a pity, I like that sign.

I did think about creating a new storyline a few times, but what with University coursework on at the moment, I've only been concentrating on character designs so far. Myabe I'll try during the summer break.

OOOOOOOOHHH!!! THAT IS SOOOOOOOOOO COOL!!! THOIS HAS TO BE ONE OF MY FAVORITES! GREAT JOB!!!! I REALLY LOVE THIS!!!! I CAN'T WAIT TO SEE WHAT ELSE YOU HAVE INSTORE FOR ME!!!! I ESPECIALLY LOVE THE POKEBALLS AS A SCALE! GREAT JOB!!!! XD XD XDXD XDXDXD!!!!

Gemini should be next, but it might not be up until the weekend.