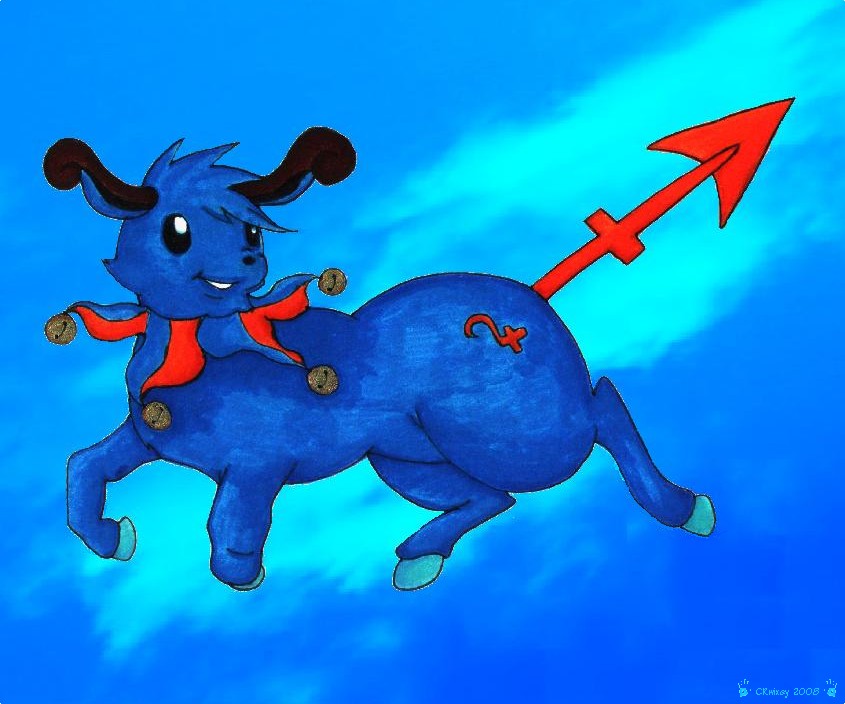 Another Astrologically-themed Eeveelution. This one's based on the ninth sign of the zodiac, Sagittarius the centaur (sometimes called 'the Archer'). Sagittarius is the mutable fire sign, linked with travel, optimism, philosophy, and the pursuit of truth.

Evolution Level:Any; Eevee evolves into Sagittareon if it loses more than a quarter of its HP through recoil damage.
Evolved Forms: n/a
Location:n/a
Type:Fire.
Description: Sagittareon are the eternal optimists of the Pokemon world. No matter how gruelling or bleak things may look, they stay enthusiastic and upbeat. They relish random battles, where they never know what’s going to happen next, and they hate being confined: most Trainers have given up trying to get them to stay in their Pokeballs. It’s fairly common to see Sattigareons galloping alongside their Trainers, and although they’re very loyal, getting them to stop horsing around long enough to enter them in a contest can be wearying.
Sagittareon are best suited to sporty and energetic Trainers, as their high levels of endurance and stamina can be exhausting. They also love travelling to new locations and meeting new Trainers, as routine bores them. Their boundless energy makes them easy to love, and despite their occasional lack of foresight, they’re the most sensitive and generous of creatures.

You're right. Signs of the same element usually get on very well. Leo and Sagittarius are both fire signs, so it's likely you'd be compatible.

AWW! this has to be one of the cutest ones I love the little bells! great job! I love it and I hope your ear gets better ^^

Aww, thanks. Sorry I only just noticed this comment... the ear's finally better, thank God. ^^

cool! you know, that one even looks like it fits my personality! ^^

maybe there is something to the zodiac after all...

Wow, you must be very typical of your sign. Some people are, some aren't, some are more strongly influenced by other factors in thier astrological charts.

the amazing thing is that im just barely this sign. i mean, its from November 22 to whenever it was, right? i was born November 23. I mean, wow. I saw the face and the little 'joker' collar, and im like 'that's me!'

I feel sorry for my best friend, her birthday's the 22nd November, so according to some readings she's a Scorpio, and according to others she's a Sagittarius. We're still not exactly which one she is, even after all this time...

wow. 0_o that must be interesting.

That's what I thought at first, but apparently you can't be born "on the cusp" of a sign, where you end up with a bit of both. You're either one or the other, and it seems to depend on the time you were born.
My friend was born before the change-over time, so I think that means she's a Scorpio... although I'm still not sure...

hmm... you haven't done a Scorpeon yet... when you do that one, are you giving it like a scorpion tail or something? that would be cool!

Funny you should say that, I've just remembered there is an Eeveelution called Scorpeon already in my gallery... I drew it quite a while back, before I started drawing the other signs. Here's the link: http://www.fanart-central.net/pic-717313.html[/url[

and i just read the description, and yup, thats me more or less!

Thanks for faving this, too. :)

Cool, I don't think there are any Sagittarians in my family... thanks for the comment! :)

hm. and NP! I have noticed that you are like the discribstion about you sign... so yeah! :D

Thanks, I've been trying to get the Zodiac Eeveelutions' personalities to match their signs, without making them sound too stereotypical.

It's odd, I'm an Aquarian but I don't have much in common with the description of Aquareon, but then I don't think I'm a very typical Aquarian... ^^