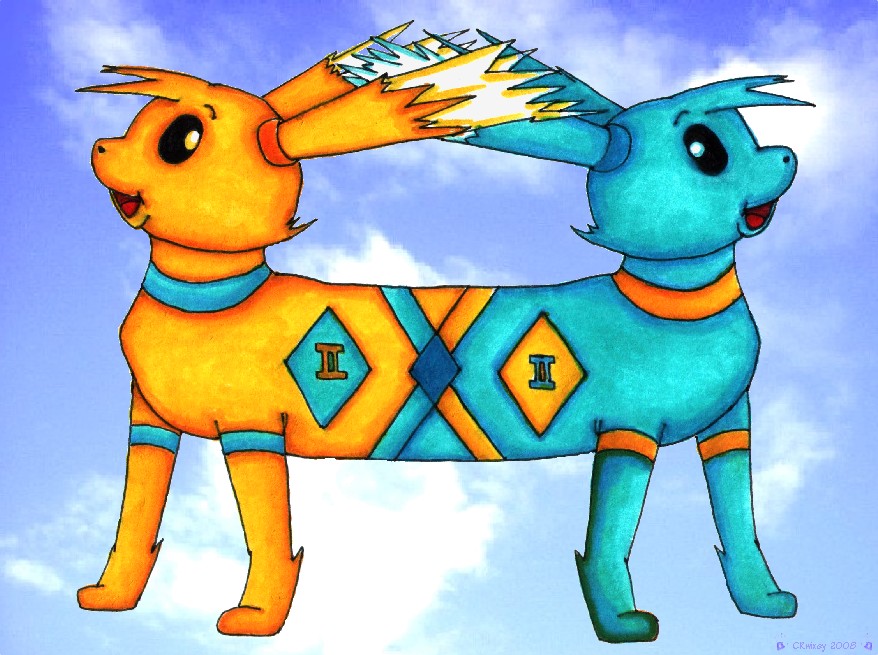 Another Astrologically-themed Eeveelution. This one's on the third sign of the Zodiac, Gemini the Twins. Gemini is the mutable Air sign, connected with skilful communication, curiosity and youth, learning and exploration.

Evolution Level:Any; Eevee evolves into Gemineon if it participates in double battles only (ten or more).
Evolved Forms: n/a
Location:n/a
Type:Normal.
Description:Gemineon are the chattiest Pokemon around. There seems to be a permanent and highly entertaining conversation going on between those two heads, although so far no one has been able to translate their peculiar language...
Gemini use their razor-sharp perception and wit to confuse and outsmart foes – although Trainers sometimes feel their Gemineon would rather make friends with opponents than beat them up. Young at heart, Gemineon never lose their child-like inquisitiveness and are eager to learn about everything. They have the potential to become highly skilled fighters or contest winners, but aren’t always sure what they want to specialise in as so many options are open to them. With careful guidance, Gemineon are a force to be reckoned with. They’re also easy to raise they aren’t picky about food – they’ll eat practically anything, as long as it’s quick to chew and easy to digest.

Wow I love it! I really do, lol I would love to see this pokemon battle it self lol!

Still hoping I can get Gloreon up by the end of the week...

wow that is cool!

cute! my dog is that sign! :D great pic too! also, remember my contest... just telling you again! :D

Thanks for the comment, sorry I haven't submitted the contest entry yet. I've got the sketch done but haven't had time to ink and colour it yet. Hopefully, it'll be up sometime during the weekend. :)

ok! also, I was thinking about drawing my own pokemon! you might see it soon! :D also NP! :D

how do they walk? 0_o
nice pic

I suppose they hope from side to side, or dash one way and then the other... I know it doesn't make sense, but just about anything's possible in Pokemon World, I guess. :)

yeah, if they can have a giant dude made of ice, why not this?

(bonus points if you can figure out what pokemon i was talking about there!)

Hmmm... is it Regice? If it is, I have no idea how it manages to balance on those tiny little points... you'd think it would just fall over the moment it went into battle...

yea, i know. and yup, it was regice, very good!

CHA, this is adorible! X3 my mommy was a Gemini ;.; god rest her soul. it's pretty XD