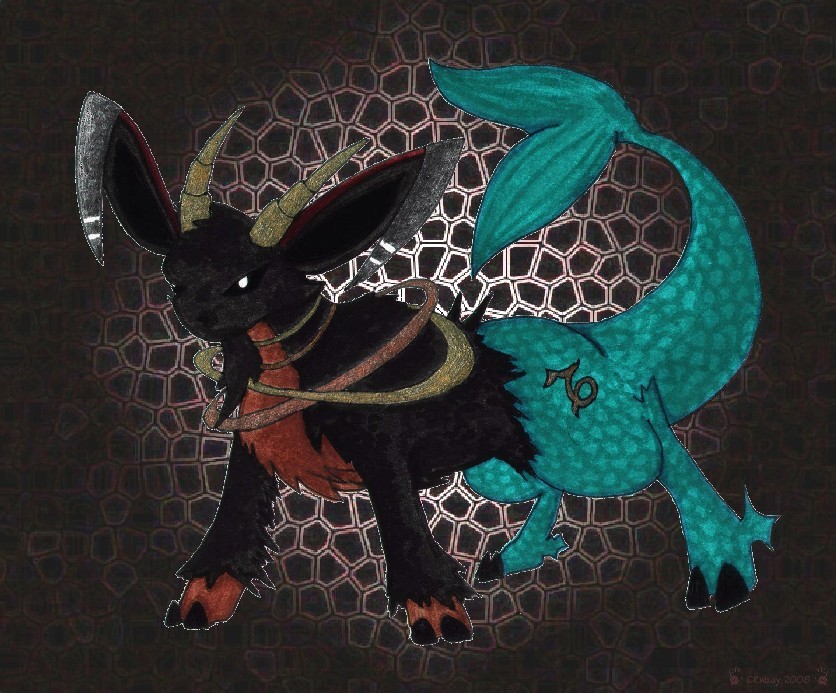 Another Astrologically-themed Eeveelution. This one's based on the tenth sign of the Zodiac, Capricorn the Seagoat. Capricorn is the Cardinal Earth Sign, connected with perseverance, time, practicality and realism.

EDIT: Shortened its name to be in keeping with the Pokemon game's "ten character name limit" rule.[/color]

Evolution Level:Any; Eevee evolves into Caprieon if it manages to survive – and win – ten or more battles without the use of berries, potions or any hold items.
Evolved Forms:n/a
Location:n/a
Type:Water/Ground.
Description:Ever been in one of those situations where your one remaining Pokemon has been poisoned, and the Potions compartment of your rucksack is completely empty, and you’re stuck in the middle of a cave and left the Escape Ropes at home, and that Trainer over there’s just caught your eye and is running over to give you a thrashing with their six-strong team of identical Zubats? Get a Caprieon to help. Once they’re focused, absolutely nothing can stop them. When they battle, they don’t bother with fancy moves or showy effects; they just wade in and get on with it.
Their combination of dark, coarse fur and rough, scaly tail give them an air of natural authority and presence. Despite their intimidating appearance, Caprieon are extremely warm and affectionate, although you’d wouldn’t know it just by looking at them.
Caprieon make tremendously loyal allies and they aren’t afraid to work hard if it means achieving the best possible results. Indicated by the scythes on the sides of its ears, Caprieon have an intuitive understanding of the maxim “You reap what you sow”.

OH MY GOD!!! This is amazing, you did way more than i thought you would on this! I LOVE EVERY BIT OF IT! I love it! especially the scythe and saturns rings XD.

Did you know Saturn is the planet of Ruins and rebirth? I may incorporate that with this pokemon! Oh and also, Capricorns are the rulers of the stars as well ^^, I may put that in too! There is just so much to do with this!!! I JUST LOVE IT SOOOOOOOOOOOOOOOOOOOOOOOOOOOOOOOOOOOOOOOOOOOOOOOOO MUCH! I am so excited. I was really sad and have been all day, But you have really made my day! Thank you for turning my holidays around so quickly for me! ^^ Thank you VERY much.

Be looking out, I will be posting a present for all that have helped me this year, and you should be on the list! TYVM!!!

I did know about Saturn, but wasn't sure how much to include in the description. I think I made it a bit too long... ^^'

it's great, lol have you ever seen sailor moon? lol this character reminds me of that show.

Thanks!I've never seen Sailor Moon, I only know a little about some of the characters... maybe Capricorneon is a bit like Sailor Saturn?

exactly what I was thinking lol. (she carries a scythe around)

ooh that's cool i am a fan of your art

Interesting... perhaps you've got some fiery signs elsewhere in your Astrology chart... then again, some people aren't particularly typical of thier sign.

Many thanks, glad you like it. Goats are cool. ^^

Personally though, I think Capreon would have been a better name.
The description also seems kinda too long to be a pokedex entry too.

As for the name, I'll have to see what Leo thinks. I prefer to include as much of the original name as possible, but that's just my approach.

I was thinking the same about the description, I might edit it later. I find some signs easier to write about than others.

kinda creepy. although cute, love the scythes on it's ears. ^^ <3 I'm kinda weird like that XD I find things like this adorable.