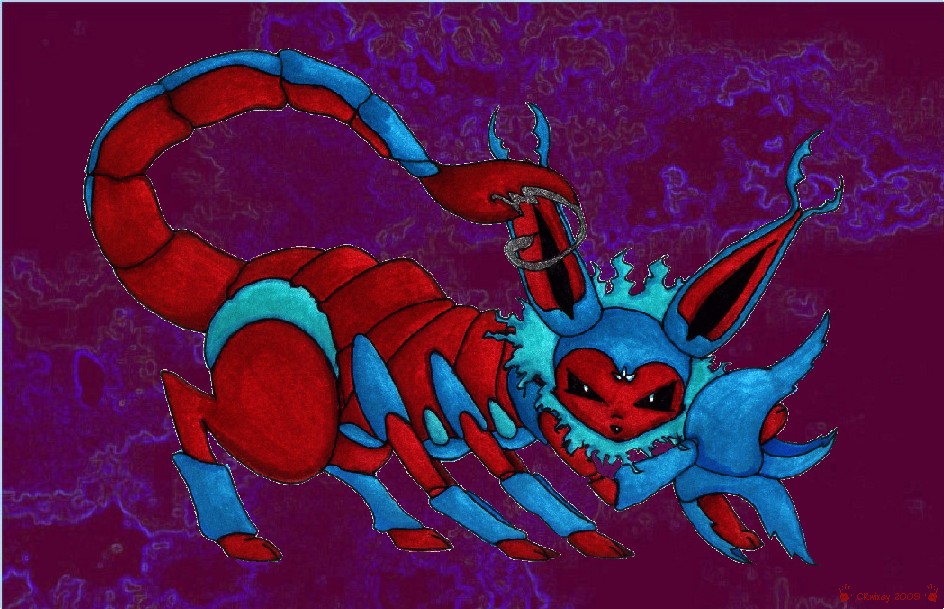 This one's based on the eigth sign of the Zodiac, Scorpio (which was orignally depicted as an Eagle, not a Scorpion, but since the Scorpion is more commonly used I'm sticking with that for the moment). Scorpio is the fixed water sign, linked with honesty and integrity, regeneration and transformation, taboos and secrets.

Evolution Level:Any (Eevee evolves into Scorpeon if it is hit with only Bug or Poison Type moves five turns in a row).
Evolved Forms: None.
Location:n/a
Type:Bug.

Description:A deeply misunderstood Pokemon, Scorpeon are nothing like as vindictive and merciless as many Trainers believe them to be. While its true they can cause opponents to curl up and wilt with a single glare, they’re incredibly loyal and protective towards those they know and love.
Getting to know a Scorpeon can be difficult as they can be so secretive and guarded, but it’s a good bet there’s great passion and intensity hidden behind that impassive exterior. In battle they’re smart, swift, intense and determined. They detest cheap tactics; as far as they’re concerned, honesty is the best policy. For them, a win gained through underhanded means is not really a win at all, but a disgraceful defeat.

omg! your pyschic! i AM looking at you like your weird!

dont worry, im weird too, so who am i really to judge, anyway? =D

XDDDDDDDDD I do have small amount of ESP, :3 I'm pretty good with preminisions, though they usually come to me in my sleep, yet I can NEVER tell whats going to happen in a movie. XD

That's very interesting... I neve seem to get premonition-style dreams, although I certainly get a lot of "strange" ones.

Lately, though, I've been getting this weird experience...I'll be asleep, then I'll suddenly sit up in bed and think "it's time to get up". So I get out of bed and start walking towards the bathroom, then I'll stop because something feels "wrong". I'll go back into the bedroom and see my body still lying on the bed...

An out-of-body experience? Woah. Creepy. Try talking to someone while out of your body and see what happens!

I'd like to try that, but so far I don't seem to have met anyone during the "disembodied" state. 'm not too sure if souls - or whatever you'd like to call them - can talk. I can hear myself thinking during these states, but that's all.
I once tried "talking" to my body to see if I could get it to wake up. I remember hovering over it, thinking "wake up, you dumb body, I should be awake by now", but I couldn't get any response out of it.

can you grab and otherwise interact with things? like phones?

I don't know, I've never tried. I don't seem to get any further than the bathroom usually, although once I tried to brush my teeth. My arm started to hurt after about ten seconds, though, like holding physical objects was hard work. The tips of my fingers were numb and tingly, like they'd been frozen. It was difficult to feel things, but I don't remember being able to float through solid objects like a ghost.

if you ever get far enough, you really need to try using a phone, and try and call someone.

pfft. I really have no idea, i'm not very good at interpitating dreams. XD if you'll excuse my horrible spelling. XD maybe your spirit is leaving your body to have a little fun or something. XD

That's pretty much what I thought, although quite often it doesn't seem to be having much fun as it seems to have "forgotten" how to get back in its body again. I usually start panicking about how I'm going to get "whole" again... and then thankfully wake up.

heh, cute. XD maybe you should try poking your body with a stick or something. :3 XD try fazing threw it, it should act like a sponge.

I tried that once... I'd been "stuck" outside my body for what felt like a long time, so I drifted over to it and started poking myself in the chest to see if I could get "in". It didn't work, though... every time I poked myself, bright pink sparks would flash in front of my eyes... it was like I'd been "locked out" or something...

then search the house for the 'key' :3 a lot of my dreams acted live video games where you had to search and destroy, or search and find, or something like that. XD :3 they usually turn out quite fun, and since it's your dream, you can't die. XD >> or you can, but you come back to life. :3 course, I usually wake up before I beat the big boss man. -_-

I've had a few dreams where I'm in some kind of messy junkyard, "searching" for something, and I never know what it is... I've often got someone with me, usually a younger girl, who I've never met before, and I'm trying to find something they've lost there... but I can never remember if I find the things I'm looking for or not. I always wake up too soon...

hahaha, I had an action dream last night, XD it was amusing, to say the least, myself, and a bunch of anime characters (all male, dunno the significance in that) were staying together in a house. (if' you've watch YGO, then think Kaiba's manshion, if you've Watched Hellsing, think the Hellsing organization base. if not, just think of a large mansion) and we were being attacked by Hellhounds, one died from a wound, how? I dunno, I was keeping the door shut as three attacked it, I heard a thump and it stoped, I looked out, and in a puddle of blood, lied a dead hell hound, with what looked like a knife\sword slash across it's stomach, I quickly shut the door and slumped down and started crying. (over love for animals, even if they ARE from hell) and NONE of the other guys consoled me. :\ jackasses. they didn't even help with the hound attack!

Aww, what a sad ending... perhaps it's indicative of your ability to remain understanding and compassionate even when those aorund your are acting like jerks or don't seem to care... I don't know, I'm not an expert at dream interpretation...

I've always wanted a pet scorpion, but my best friend says she'll never visit me again if I get one... funny, she's a Scorpio herself... oh well. :)

I dun really want and Scorpion, since them and Spiders scare me, especially the Tarantulas. (plz forgive me if I misspelled that. XD) scary and harry creatures. of course, I like snakes and mice, my parents HATE them. XDDDDD course my mom had a pet snake, Boa Constrictor. :3 maybe THATS where I got it from, XD

Wow, a boa constrictor! I'd like to see one of those for real... perhaps I shouldn't mention I'd love to have a pet tarantula... oops. They don't scare me, but almost all the flying insects do: moths, wasps, crane flies... they all scare the hell out of me... *^^*

flying bugs dun bother me, *shudders* hate spiders. I've never seen the snake though, I HAVE seen Boa's at the zoo. (we went during the summer, my cousins, aunt and grandma and I) and we say both a normal and an Albino boa :3 alas they were in the same room as the penguins and hippo's. -____- I hate birds too. it's sort of a Hate X Hate relationship, they hate me, I hate them, they attack me, I swing at them with a stick trying to get in the house, it's Sorta like Hitchcock's, the Birds, only, no one gets there eyes peck out, I still say it was those damn canaries that cause it!


Lol I LOOOOVE it's tail, I just want to pet it, but that might not be a good idea... lol

And don't worry, you can pet Scorpeon. It looks fierce, but it's very sweet really... :)

cool! I also like this one! the red goes nicely with the blue... well great pic! hope to see more! :)