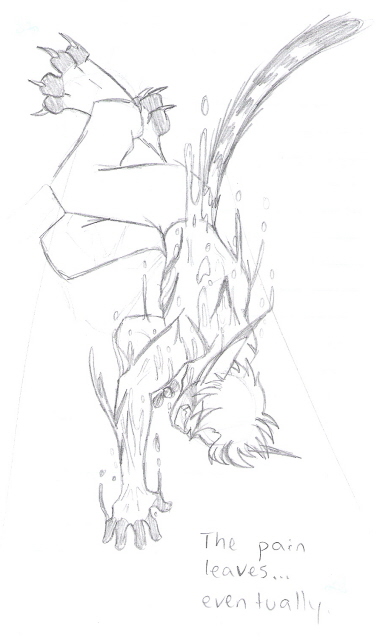 When Cyrus tries to get himself and his sister out of a cult, the gods consider it Greed, so they curse him with tiger-like markings (he's actually supposed to be younger than dipicted in this picture, but his older form looked more convincing when in pain ^_^). Before his cursed skin, he was first cursed with the tail, then his face was cursed, and then his feet. (read my "one sin committed is one curse given" picture for more information if you're confused)

Now, don't get the wrong impression about this cult. These people starting out in the cult were obviously cursed when they were very young and have lived tortured lives with this curse. Since the gods are responsible for the curses placed on people, they put all of the blame on them and will do anything to anger them, so that once the gods are fed-upo, they can meet with them and kill them and possibly be rid of all of the curses. Nobody thinks they're good because of all of the sins they commit, but nobody also knows their true intentions. The cult members are, in a way, both good and bad.

DON'T WORRY CYRUS! EVERYTHING WILL BE OK! *glomps him*

Cyrus: Why are you doing this to me!! TT_TT

awww poor cyrus! i dont like the "gods" they piss me off. nice drawing ^^ WOOT WOOT im getting LUNAR: DRAGON SONG! MUHAHAHA im sorry that had nutting to do with this ^^ any way love the whole thing ^-^

wow... awesome pose. As much as I'd hate the curse thing, it'd be cool to be like Cyrus. love his hands, and his facial expressions are awesome.
*Faves*