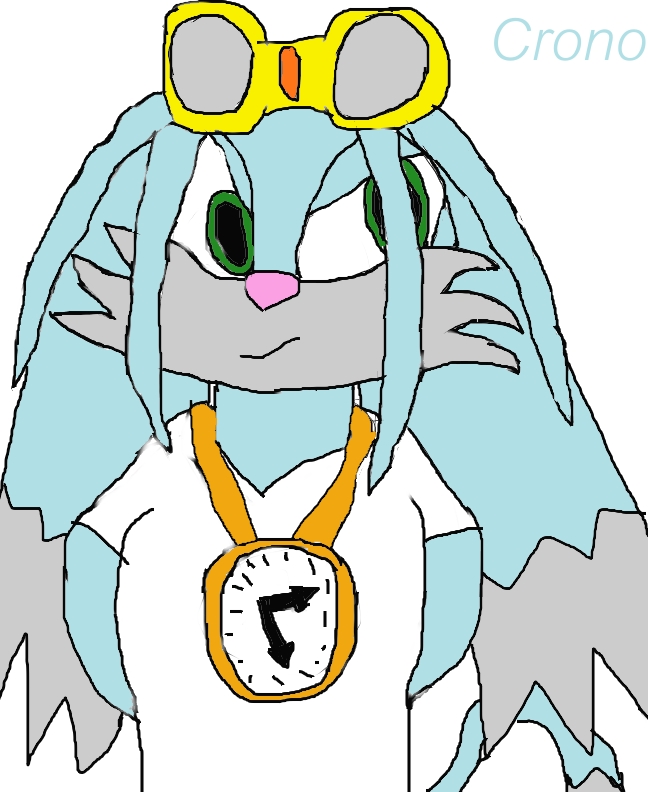 WHAT THE PINEAPPLE PICTURE OUT OF NOWHERE?!

So...yeah. This is my Klonoa fan character Crono, a floppy-eared cat (flightless, but hey, it happens). A friend of mine wanted to see her, so after drawing this originally by hand, I decided to replicate it on the Art Program from Heck (also known as Corel Painter Essentials 4) because I can't scan the original drawing. Some stuff got a little lost in the 'translation', but all in all, not too bad. I got the correct feeling, anyways.

Crono has the ability to manipulate time with the clock she wears as a necklace. However, this doesn't always work, so when she needs to defend herself, she has a frying pan (not pictured here). The goggles she wears are from Digimon, a slight homage to Klonoa's Pac-Man-related hat.

Crono is quick-witted, sarcastic, and doesn't really get along with Klonoa, causing all sorts of chaos in the dreamworld he meets her in. The interaction between the two is a seemingly unending battle for dominance/respect/leadership/getting to be the hero. A battle that neither side seems capable of winning. Problem is, in this dreamworld, the two need each other to survive.

That said, I would say this dreamworld's as good as doomed, since they seem more focused on destroying each other than the bad guy.

Cool pic!
I have a Klonoa fancharacter, too... X3

No problem, and yay 8D
My character's Sunny-chan! ^w^

Thanks. ^^ I tried to make her ears flow like hair so she looks more feminine. As for the watch, I went with a necklace so it would be easier for her to get to.