Cloud vs Barret - Armwrestling by Cloudyfan 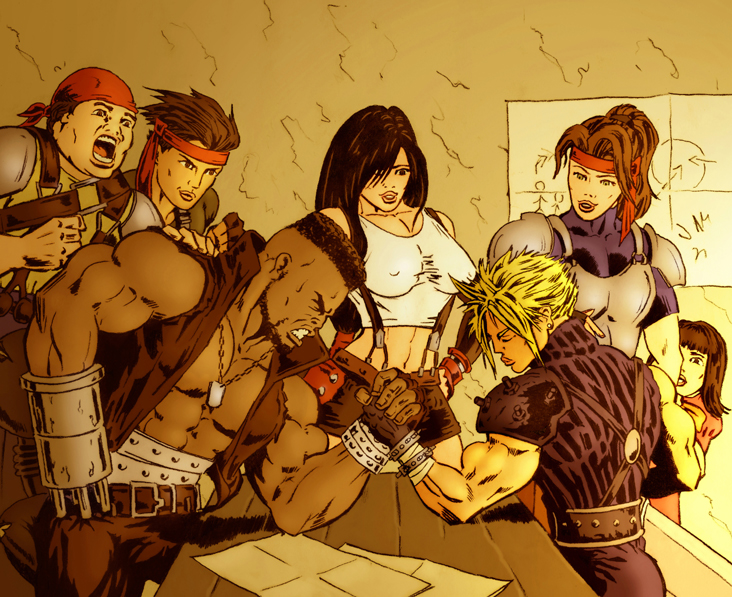 is work was inspired to me by a painting of the Quebecer illustrator François Miville-Deschênes, work representing a barbarian and an Amazon engaged in an armwrestling in a tavern with a glowing light... It illustrates an imaginary episode of the beginning of the game Final Fantasy VII and takes seat in the rebels hideout. Does Barret Wallace put the new recruit Cloud Strife to a strength test ? Does they brought into play the leadership of Avalanche ? The fact remains that the colossus with the gun-arm seems to discover with bitterness the scientific performances of the Shin-Ra ! It was also for me an occasion to represent Wedge, Biggs and Jesse, these anonymous heroes of the first hour, quickly disappeared and quickly forgotten (by the fanartists as by the others…) ; the last conversation between Cloud and Jesse dying, right before the collapse of the plate of the Midgar Sector 7, is one of the most touching scenes of the game… Large size downloadable image for who wants ! Cloud, Barret, Jesse, Biggs, Wedge & Marlene © Square Enix

Barret looks cool... but Cloud and Tifa need some work...

I totally agree, the original AVALANCE members are never given enough credit. I haven't seen fanwork of them for a looooooooooong time, and this is best I've seen! Awesome job, great concept, exceptional attention to detail.

Do not throw any more : the court is full ! (French expression) Thank you !

I know, I know... It is my style to increase the musculature (the tumour you speak, if I well understand) of my characters. That counterbalances all these drawings of anorexics who pullulate in the japanimation... Thank you for your compliments !

Nice!!! ^_^ Great poses and coloring! Tifa takes my attention from the rest of the pic though... ;D