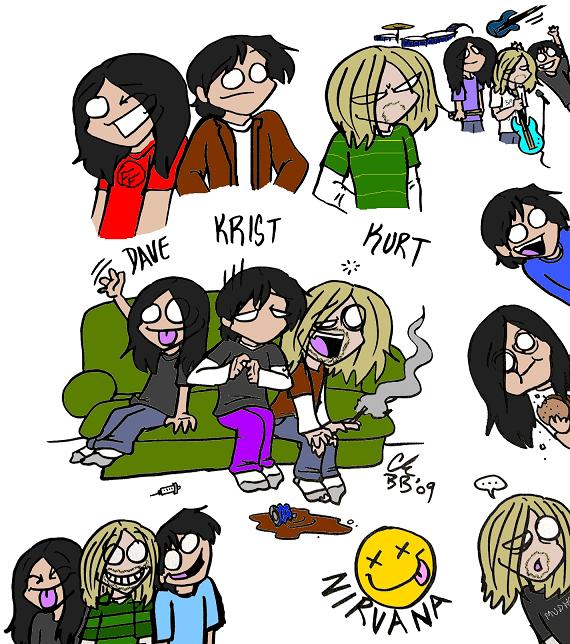 "Since it's Halloween, we're gonna play you our SEEECRET SOOOONG!" -Krist, reffering to "Endless Nameless", the song that'll play if you wait AAAALL the way till the end of the track on "Something in the Way" on the album 'Nevermind'. ;) (Which most people don't. So it is, in fact, secret. There's like a 12 minute silence between the two songs, though.)

--Edit: I just recently learned that not every CD has the extra song. And it's not just out-of-country discs, because my stepsister has a copy of Nevermind, and it doesn't have the song at the end...and yet my dad's does. If anyone else does/doesn't have it on their copy, by all means, lemme know.--

Yeaahhh. Now that that's out of the way...felt like drawing up some Nirvana fanart the past couple of days. AerithCobain from dA inspired me to.

So there's a TAD bit of adult content here, seeing as Kurt's high in the middle section. (And yes, that is a syringe on the floor. >.> lol) And Dave's red shirt up top is a pretty obvious Foo Fighters reference for those that don't know. xD

XD yes, the "SECRET SONG!" lol, yay for Krist and his purple pants and the awesome bass toss! I hope it doesn't land on his head! D:> ...why does Dave have a Foo Fighters shirt when they weren't around then?!?!?

>.> Because I was just referencing. Is that not allowed? lol