A Moment in a Day in the Life

Home » DayDreamBeliever » Pictures » A Moment in a Day in the Life

A Moment in a Day in the Life

A Moment in a Day in the Life by DayDreamBeliever 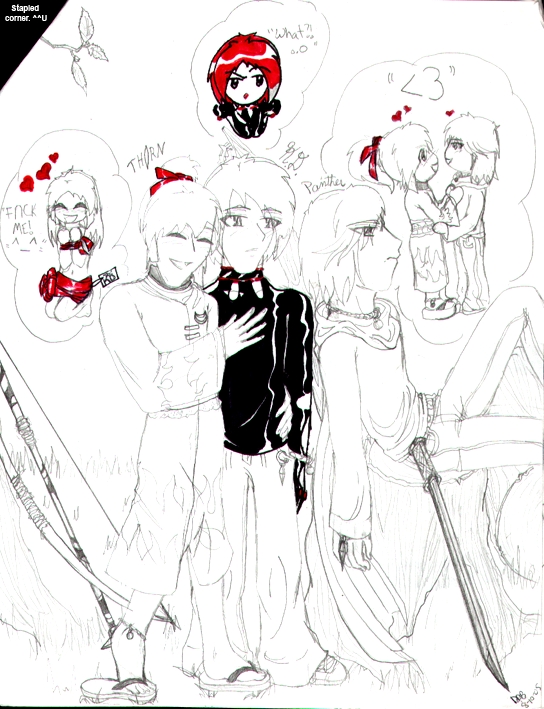 A remake of characters I made long ago, back in 6th grade. It's kind of like Inuyasha(obviously), only not.
=====+=====
There's this crystal triangle that opens the gates to hell (what the humans refer to as the demon world), and he who owns it shall be hell's ruler. The thing is, a long time ago, a bunch of 1800s Christians stole it and busted it up. Bastards. So, they sent each shard of it (15 total) to a different, holy location. K.D. is a descendant of the ruler of that time, and he has to take the position, lest all hell break loose. Literally. They've each got one shard (check their jewelry), except Thorn's is stolen at this point. (He does, however, own the crystal sphere to open the gates of Heaven.)
=====+=====
This is a scene from somewhere in the middle of the beginning of their travels. Thorn likes K.D. quite a bit, but, obviously, wants to frack him pretty bad, too. K.D. is completely oblivious to either of his companions, but, even if he wasn't, has a boyfriend in the human world, anyway. Panther hates K.D.'s guts, because he's liked Thorn for ages, but Thorn won't even look at him that way.

Panther's too big and K.D. and Thorn are too short+deformed. ><