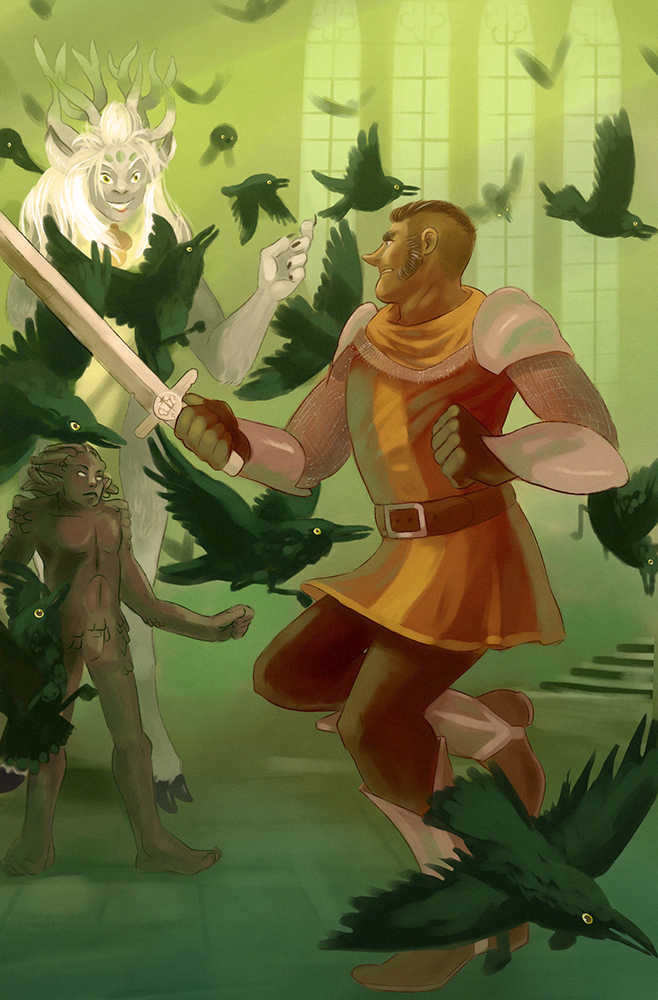 Based on an original story by my husband, exurb by him. Will try to remember to post the story here once it is ready!

Lance skidded to a halt, his boots squeaking against the marble floor. The ravens were cackling all around him, nesting in the rafters and arches of the Fairy Court. The Fair Lady was coming. He could hear each hoof step echo through the hall as she stalked him.
“Run, human, run!” she called out. She was massive, a giant faun, ancient and crested with branching horns. “Make me work for it! The chase will make you sweeter.”
Lance dug a shard of magic glass out from his bag. It was the last one. He meant to use it to escape from here, but nothing had gone as planned. He crushed it in his fist, and felt goosebumps run up his arm as magic rippled through his body like ice.
“Come and get me!” Lance cocked his fingers into the proper gestures, and fixed his mind on the incantation. In a flash, he vanished, and the ravens erupted into shrieks as they scattered to find him.
The Fair Lady indulged in a laugh. “Do you think you can escape? Adorable. This is my domain, Sir Grayweather. The walls bend to my will.”
Lance had no intention to run this time. The hiding spell would last enough to get into position. He pulled the sword free of its scabbard, and sprinted to close the distance. One blow was all he needed, and this fairy would be slain. He reared back his arm to plunge the blade through her heart.
'You’re just an old killer. I’d sooner kill myself than be like you!'
Sword ready, Lance hesitated. His son’s words rang in his ears again. He shook his head to focus, but it was too late.
“He’s here, my queen!”
The nymph tackled him from behind. The Fairy Lady’s concubine, of all things. Lance bashed him in the face with his elbow, and wrestled himself free in time for the Fair Lady to kick him square in the chest. It hit with enough force to send him sliding down the length of the hall.
Pain flashed in his ribs like fire. His chest plate was dented inward. He must’ve broken something. He forced himself to his feet and scrambled to grab the sword. He was as good as dead without it.
The ravens swarmed, whirling through the air like razor blades. Their talons and beaks tore at his armor and face, leaving bloody streaks. Lance swept the sword through the air, cleaving three ravens in half in as many swipes. The Fair Lady screamed, and the ravens fled from his reach.
“Cold iron?!” The Fair Lady wrapped her arms around herself. The weapon made of fairy bane had caught her by surprise. “Then you knew I meant to kill you. Why did you come?”
“To stop you!” Lance pointed his sword. “I won’t allow you to harvest any more humans! This ends now!”
With a shout, Lance hurled himself forward with the blade aimed to slay. Before he could react, the nymph leapt into path of the blade.
“You… Urrgggh!” The sword slid through the nymph’s torso like butter. “You won’t touch our queen!!”
The Fair Lady grabbed the nymph from behind, and touching the tip of the sword, cast a spell. The tip cracked and shattered, and the wound in the nymph’s chest turned to stone. Lance pulled, and found the sword trapped in the nymph’s body.
“What did you do!?” Lance said. The Fair Lady replied by bashing a fist across his face. Lance fell to the floor with a clatter of armor.
She was standing over him, smiling like a lunatic. The ravens were gathering, squawking, hungry. His head was pounding from the pain, his eyes were heavy, his face was swollen.
“A noble effort, Sir knight.”
Consciousness drifting away, Lance was terrified. He was moments from death, but that was not what scared him. What frightened him was that he knew he would not have a chance to see his son again.
-----