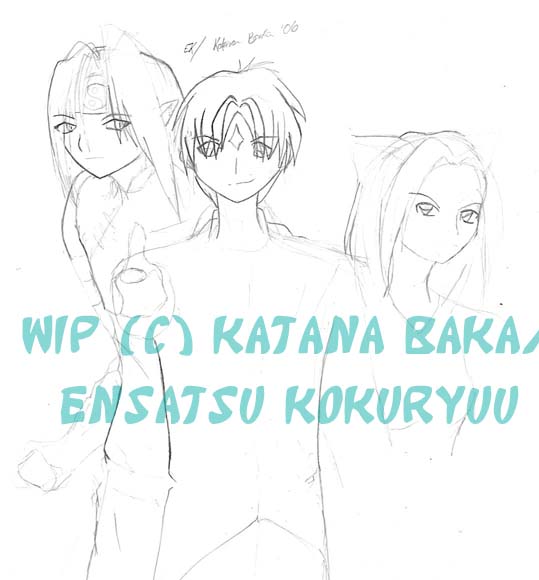 This was for a sequel to a fanfic that I'm currently writing on FF.net. Yes, YYH/IY crossover. I'm sure my fic is very cliché.

...Anyway, since I doubt any of you will read it, I'll spoil a small part of the ending: Once the conflict in the story has resolved, the YuuYuu/Inu gumi have to figure out what to do with Bankotsu. He can't really stay in his own era, as people still fear and loathe all members of the Shichinintai. For that reason, he's dragged into the modern era. But what to do with him there? Well, since Yuusuke has long been discharged, the group sends him to Koenma. That way, he'll still be able to kill stuff, but he won't be killing the wrong things. However, he still has to go to school, which causes Kagome (and Inuyasha) to keep a close eye on him to make sure he stays out of trouble.

Yeah. That was probably the crappiest summary that I've written in a while. Continuing on, though, the person to the left is Kinryou. Kin-baka is to Bankotsu as Itsuki was to Sensui...sort of. I mean, like Itsuki, Kinryou doesn't work for Reikai but still comes to be Bankotsu "partner" of sorts. The incomplete person on the right is...I dunno who she is. I basically drew a generic girl and then threw ears on her head because I was bored. >> However, I'll probably replace her in the end with someone else. I'm afraid to have a kitsune girl character...especially since everyone and his/her grandma has one. I don't want an incredibly stereotypical character. >_>

Soo...Yeah. I'll probably replace her and possibly add in another character. Suggestions on that are welcome. ^^; Though, I'd rather use supporting characters from YuuYuu/Inu. Oh, and if anyone has an OC suggestion, that's fine. ^^ Just please, don't ask me to put a Mary Sue into the story. -_-;;