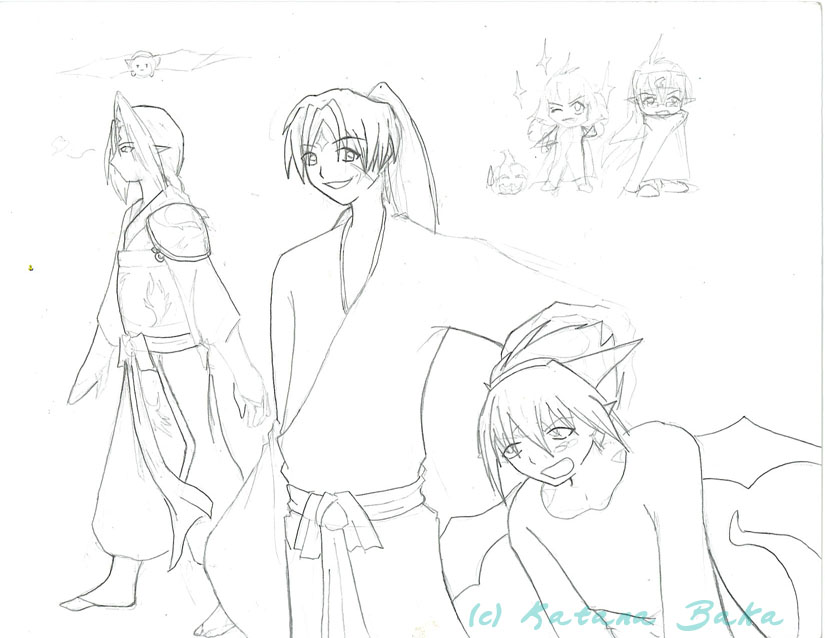 Random attempt at a Halloween picture. I should have uploaded a day or two in advance, simply because FAC is really slow when it comes to uploading pictures. >>; I didn't have time to colour this, but I must say that my scanner didn't really do it much justice in this sketch form. >>;;

So yeah. Bankotsu is dressed as Battousai for Halloween. He apparently didn't get the memo that Kenshin made a vow never to kill again. That would probably be a bummer for the Shichinintai leader.

The person being harassed by Bankotsu is Hiei! 8D He's not really into the Halloween stuff as much, so someone pretty much just forced him to be a dragon-boy...sort of like the catgirls except not. Aaanyway, he's probably being attacked because of his half-hearted costume. Either that or Banko is trying to get candy out of him. >>;;

To the left is my own character, Kinryou, who isn't particularly enthusiastic about Halloween either. However, the thought of dressing up as the Shichinintai leader was far too tempting to pass up. Did I mention that Kinryou secretly admires Bankotsu?

The chibis in the corner are Amelia (Slayers) and Ginryou. They're both obsessed with justice, so I decided to draw them with matching costumes. Amelia's supposed to be Fye, and Ginryou is Kurogane, two characters from Tsubasa Chronicle. Oh, and the thing that is barely visible beside them is a sheepish looking pumpkin. ^^;