Are you Challenging Me?

Home » EnsatsuKokuryuu » Pictures » Are you Challenging Me?

Are you Challenging Me?

Are you Challenging Me? by EnsatsuKokuryuu 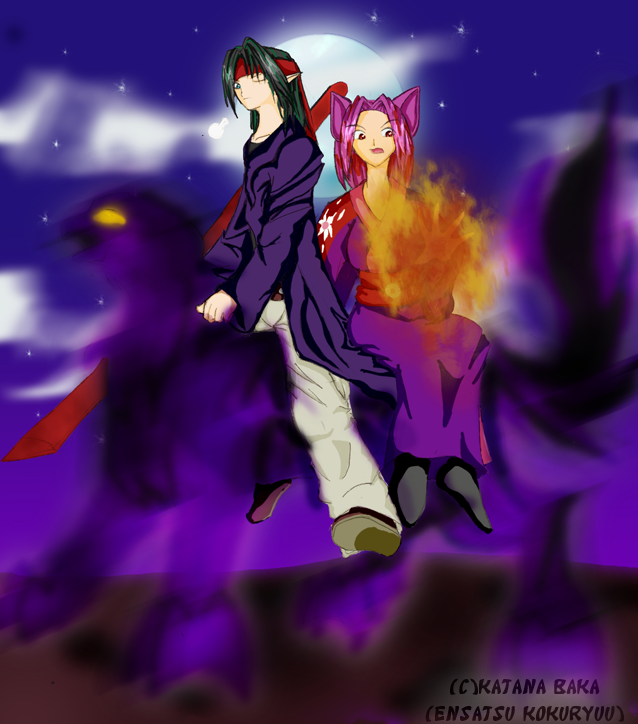 I drew this back in August, I think, but I CGed it today. No, not my best picture, I've known for a while that this was one of those pictures that was doomed never to turn out well. -_- However, I felt compelled to finish it. I don't want to have the reputation of never finishing giftart/requests/etc. >>;;

Actually, I'm very late for the contest, which is already over, but this was going to be my entry. >>;;


Well this is Kinryou (again) with the contest holder's character, Amaya. They've easily fought off some attacker. Either they've given the attacker a chance to retreat, or they're in the process of doing so. However, both of them are pissed. Kinryou is sighing. However, there are some subtle Kinryou-ish hints of anger. For one, the spell combo of Yoru-Akai, a spell that makes weapons out of blood, and Yoru-Shi, a spell that temporarily fuses a dead soul to a dark substance. Kin's favourite soul is that of a griffin. >>;;
Amaya, on the other hand, is obviously pissed and is about to char someone's sorry arse. >>;; Oh, and she's in youkai form. Dunno if she useses that frequently. However, I'm just going to guess that it means she's more serious that she would be if she was in her human form. I sort of feel bad for the idiot that challenged them.

Maybe the attacker is somehow related to Amaya's aunt and Shi. >>;;

...And since I started the 100 themes manga art challenge, I figured that I'd count this toward it. I mean, yeah, I started it way before I decided to take on the challenge, but I just recently CGed it. Plus, it fits the theme...>>;;

Again, this isn't my best work. >>;; I wish it could have turned out better, but I was experimenting with angles/perspective at the time, which is probably one of my weak(est) points.

wow i think it's cool.*faves*p,s almost done with ur pic.

(Sorry if this is a double-post. FAC hates me right now.)