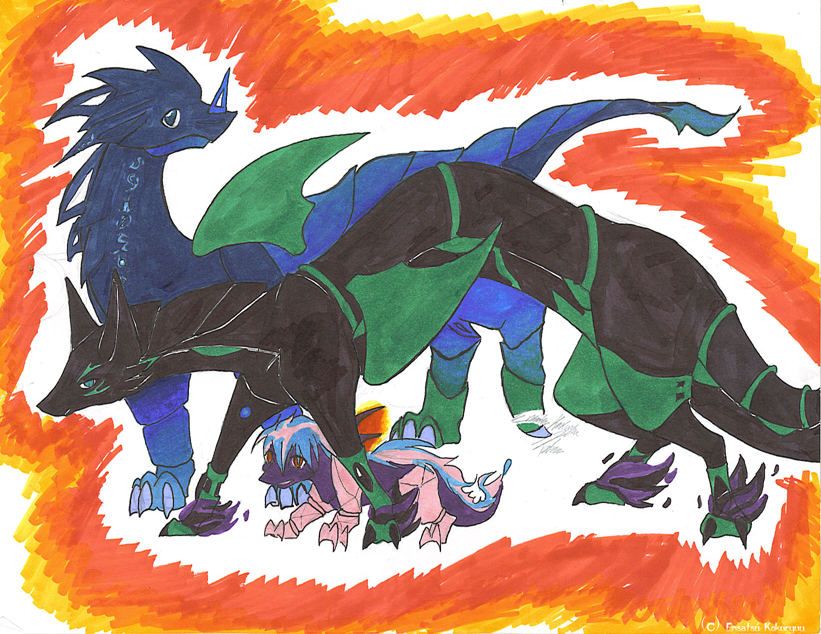 Three of my dragon characters, Kinryou (black and green), Yume (small purple/pink one), and Enkidu (blue one in back). They were originally going to all be on this Yuu Yuu Hakusho-ish board about the black dragons (kokuryuu) that Hiei summons. Yes, Kinryou is the only one with a little black in her design. >>;; They shift into the Makai flame forms, which are black. Or something like that.

...Of course, that forum isn't currently used/existent, so they're just three random dragon characters of mine now. They'll probably still remain Kokuryuu in any Hakusho fanfics/RPs in which they may or may not appear. *shrug*

Anyway, this is an old picture. As in, I am not blowing off the requests with this picture. >>;; It was coloured with a combination of Copics and Prismas. I am not accustomed to using either of them, so that's why the colouring looks so icky. Besides, I still have to figure out how to shade pictures now. >>;;

...Actually, this picture wasn't intended originally to be Kokuryuu-related either. >>;; I just coincidentally used these three in both the intended fandom (for this particular drawing, that is) and the Hakusho fandom.

Kinryou, Yume, Enkidu, and the art all belong to me (Ensatsu Kokuryuu) and me alone. >:3

Very nice picture. They are all cool looking.

Thank you! ^_^ You think their character designs are alright? Yay!

You're welcome. I think the characters designs are cool!

wow, you did a good job.