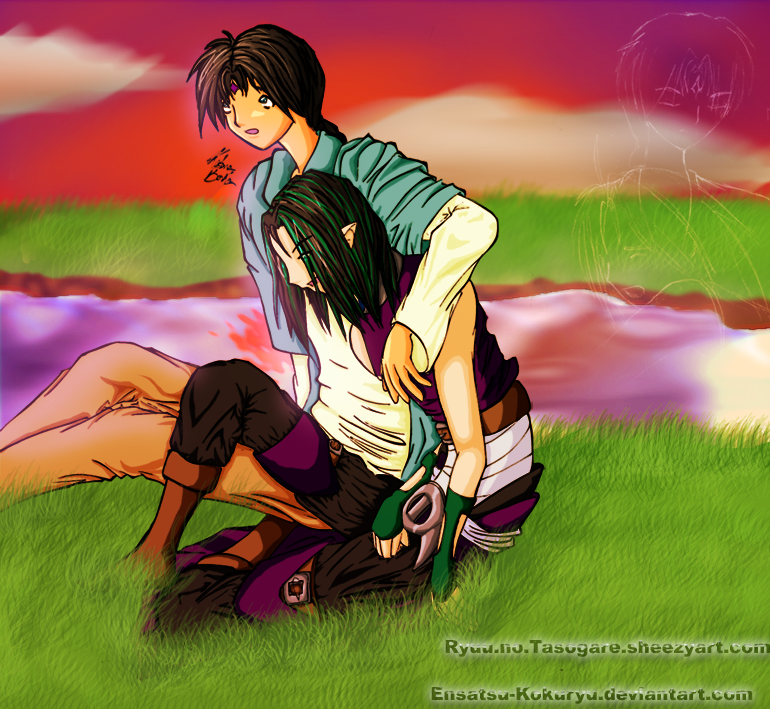 Dah. Not quite a couple. Kinryou wantsit to be a couple, but alas, Bankotsu has no such interest. D: Sucks to be you, Kinkins.

Anyway, this is old...The background was recently redone, as the first one was icky. Now it looks almost half-decent. : D *is proud*

...This is also the product of a gimp-crash/corruption. There was a different version of this, but when I was almost done, Gimp closed while in the middle of saving and thus destroyed the picture. ;_; That was horribly depressing, especially since I had originally finished the first one but only decided to do that extra editing at the end due to a dislike of the background. Ironically, that former background was similar to this one...It just didn't have the river, and the grass looked worse. D:

Oh well. This one is much better, in my opinion. ^^; Maybe someday I'll post the lineart of the former, as the CG is gone for good.

Eeeh. I don't know if I should do a shounen-ai warning or not. Technically, this isn't a boy/girl picture, but it also isn't exactly a boy/boy picture. Kinkins is androgynous/hermaphroditic. Granted, Kinkins is the only one who is romantically interested in this picture, sooo...I guesss not. But if you think I should warn anyway, I will. ^^;