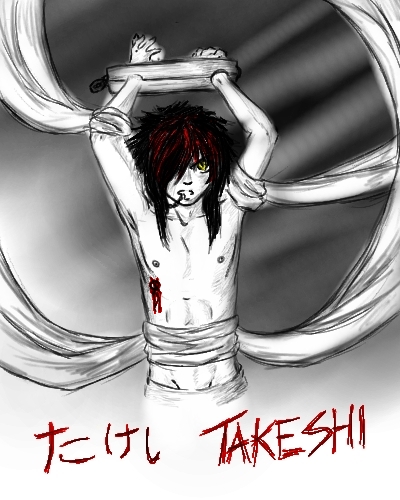 Takeshi is japan's most popular rock star, he is surrounded by fans at almost all time and he is praised as a musical genius.
Himself, he claims to be a descendant of Erik, more commonly known as "the phantom of the Opera".
Because of this he is offered the part of Erik in a movie called "The angel in hell", he turns down the part until he meets the person who will play Christian Daae, a male version of the original Christine.
That person is Setsuna Monoagi.
Later on Takeshi becomes Setsuna's self proclaimed boyfriend, and he keeps hanging around him at all times, trying to seduce him or just get in his pants.
He also becomes good friends with Akira.

Worse bio than the other two xD homigawd I suck....
please be nice to him^^ he's my beloved baby.

ooo this looks cool!!!! lol but how can he lik phantom and h8 andrew lyodd webber??? haha anywhoz this is a cool pic and an awesome story!!! :)

he likes the original Leroux phantom, and dislikes what Webber did to the story x3
I like Webber myself though xP