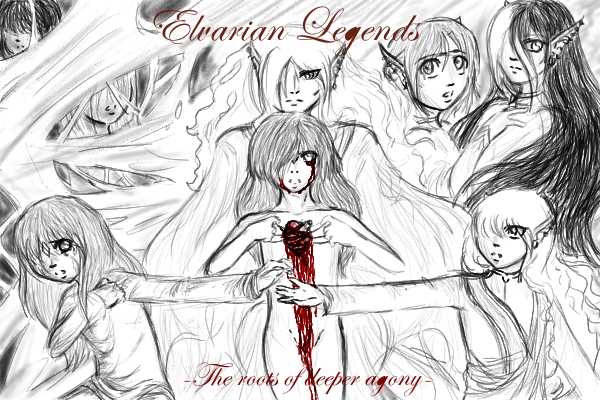 I now present my most beloved series to the world, the Elvarian Legends.
This is a picturing of some of the characters in the first arc of the story, called "the roots of deeper agony".
This story is the most tragic and angsty of all my stories, and it's been an ongoing project since I discovered manga for the first time.
The characters this arc mostly evolve around are the ones in the middle, the dark haired one holding the heart is Rayaku, and the blonde tall one is Kizoue. The other characters are Kazuo and Iyaki in the upper right corner, Iyaki is the one with long black hair and Kazuo is the other one.
Then there is Kami and Inoue, the children reaching out for each other, whom I've already presented before.
The characters who are mostly hidden are unimportant...

When I'm done with the character profiles and descriptions for the "my tears for your smile" series, I'll upload single pictures and character bios for these characters as well :3

Hope you'll like them as much as I do one day^^
Also, all the visible characters here are men xP