Our little "family photo" by EternityMaze 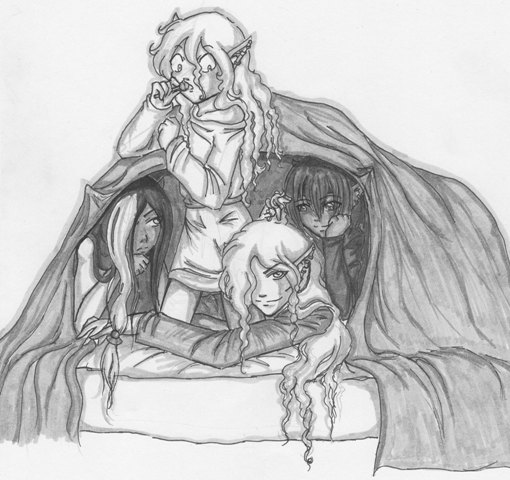 A little "Family photo" I did of the first demons that are central characters in my Elvarian Legends.
They're Inoue (The youngest one with the lolipop), Kizoue (Inoue's older brother, arms around Inoue's legs), Kazuo (the one with his hand tangled in Kizoue's hair) and Iyaki.

Kizoue, Iyaki and Kazuo are official lovers in a three-side relationship with eachother. To demons it's normal to have up to four official lovers, whereas threeing is most normal (threeing - when three people are lovers).
Kizoue is also the crown prince, later on Lord, of the demons and Inoue's older brother.

Inoue and Kizoue are also "unofficial lovers". In the demon society it's very usual that family members are "lovers", but marriage and official relationships are not allowed (also in family pregnancy). I've already explained the fact of the mental age of demons, where they mentally mature about twice the speed of a regular human. So you're concidered a legal adult at 14.

Alot of unnecesary info here xD I hope to make a better picture of them once... hope it looks okay though, I kinda rushed it ^^'

(Ps: demons are such a good excuse to make weird relationships! xD)

I'm trying to be slightly original^^

It must get cramped with such a large group.
anyway,another fine drawn you've.
It's rather lively

thank you again^^
I'm really glad you like it