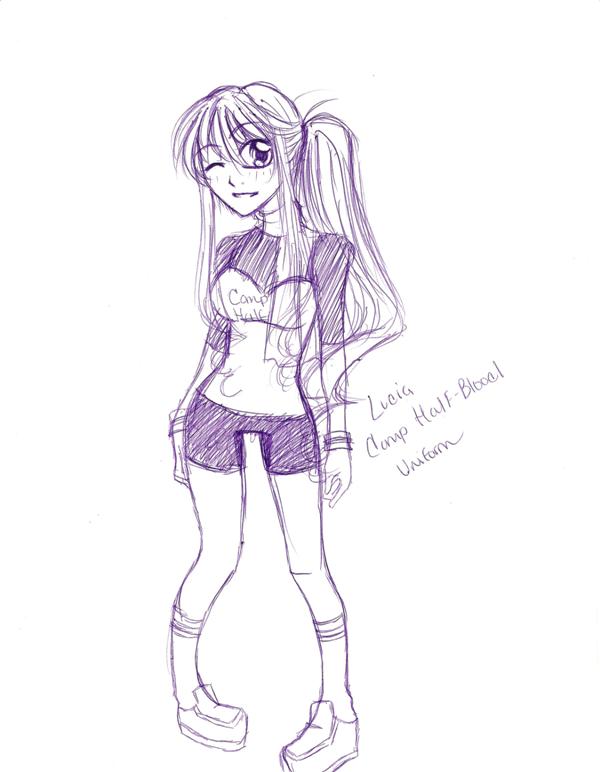 -Description: Lucia has long silver-blonde hair that seems to emit a faint glow under the night sky; it hits just past her thigh and is slightly wavy at the ends. Her eyes are a very deep blue a reflection of the ink colored sky, seeming to hold the flickering orbs of the stars in their depths. Her skin is very pale with rosy cheeks, and often appears with vibrant red lips. She is 5” 4’ and has an hourglass figure with noticeable curves.

-Personality: Lucia is a very meek woman who is very awkward in social situations; due mostly because of her father’s severe over protectiveness. She has a hard time showing her feelings and often ends up in embarrassing situations. Although, she is a demigod she loathes battle and most of the times finds herself running away from violent confrontations unless one of her friends, family members, or resident of camp Half-Blood is in absolute trouble will she succumb to lopping off limbs. Despite her innocent appearance her lonely childhood made her turn to a profound way of thinking.

-Family: Her father is Jude White, a divorce lawyer, who tried his best to bring up his only daughter. He is very protective of Lucia even though she is hitting near thirty and doesn’t approve her being associated with any gods, goddesses, creatures, or even other half-bloods for that matter and holds a grudge against her mother. Her mother is the lunar deity, Selene, who is the daughter of titans Hyperion and Theia.

-Powers and Abilities:
~Lucia is able to emit light from herself under a night sky or any other place that is swallowed in shadow.
~Lucia is able to see well in the dark, but her eyes are very sensitive in sunlight.
~Lucia can manipulate moonlight to heal her wounds.
~Lucia is excellent with a bow and arrow.


-----
This is Lucia White, my Percy Jackson character; my bestest friend :iconrikki-the-great: got me to read the first book and I loved it, but I must finish Darren Shan before I read the second book >w<. Anyway, Lucia is the daughter of the Greek goddess, Selene, who is a lunar deity; her father is a divorce lawyer x3. But, she's 26 and works at Camp Half-Blood, not sure what her job is though, she's not much into fighting since she doesn't have the patience to train, but she <3 lovvess Chiron.

Annnddd the outfit. Well, I wanted her to have a spiffy Camp Half-Blood uniform; a tank, turtleneck, shorts, scarf, wrist bands, long socks, and some weird I don't know what to call them shoes. I was going for a 'geek' or 'nerd' look, but I'm not sure if I got that across ^^;. She's definitely a 'geek' or a 'nerd', but a cool one :3. One of those awkward shy ones that people have a soft spot for?

Buttt them Ares kids are mean ;w; and she gets poked by Clarisse's spear a couple times before it's broken; ouch~!

And before I write a book I shall move on to the crediting~! >:3