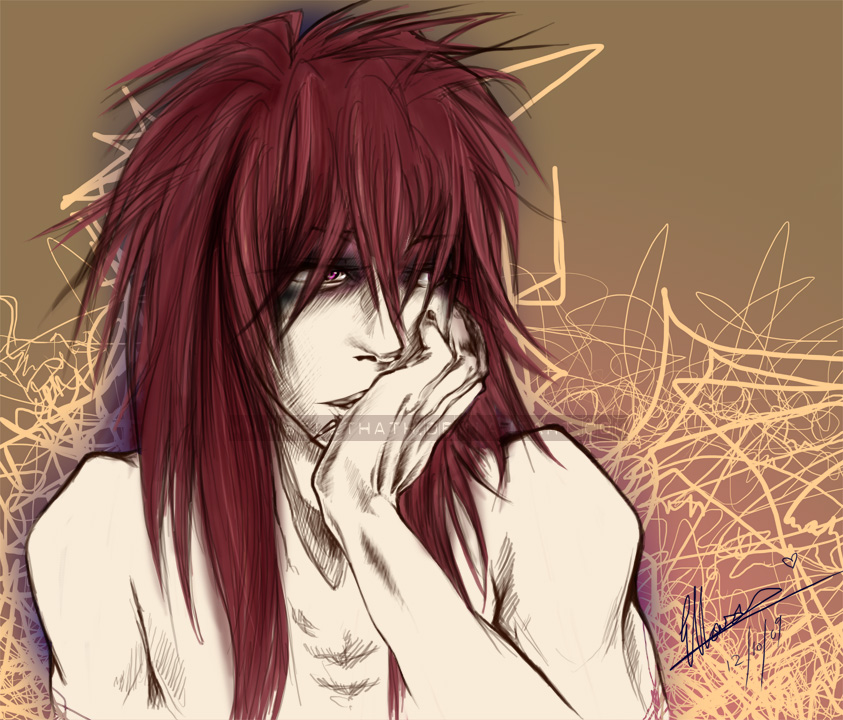 He's my part of an OC couple i'm collabing on with someone :P

GOOD GRIEF his background is tragic. But he's still an optimistic guy :D

The shading and detail of the hand look great! You love drawing that big spiky hair, lol. xD

he's the kind of guy in love with beauty. And that guy, Adaire, is beauty incarnate.

He's usually shy at first. His full character profile is on my dA. His seme is a ram horned demon called Varnava.
Adaire has never been in an intimate situation lol, the very thought of it terrifies him xD Poor guy.

Piortaul: *smiles innocently* I can help you get over that fear, Adaire...^_^

Adaire would run a mile.

And, to chase after beauty, Piortaul would run forever. ...though, i guess to be more acurate, he would create a gate in front of Adaire and let Adaire run into it...and then keep him trapped in whatever twisted world he deemed. He's insane like that.

btw, there's a reason he's name Piortaul. He has two abilities as a demen: creating portals (or gates) to and wherever he wishes, and the ability to transform into whatever he wishes (as long as he's seen or touched whatever it is he wants to turn into). so...yeah. Adaire might want to be careful. Very careful, actually.

Piortaul: Must you tell them all everything about me? <.<...

Rei: If Adaire didn't know what you could do, he'd end up like Sai! *points at the kid in the corner*

Piortaul: ...oh, come on. You can't blame that one on me. That's Kouyou's fault. I had nothing to do with that one.

Kouyou: I'm so glad we're in agreement for once.

Piortaul, don't you dare touch him <<

wow it looks amazing :D
and i really like his hair ^_^

that is awesome!!! love the hair