Aliens: The Last Thing Weyland Ever Saw.. by GhostHunter94 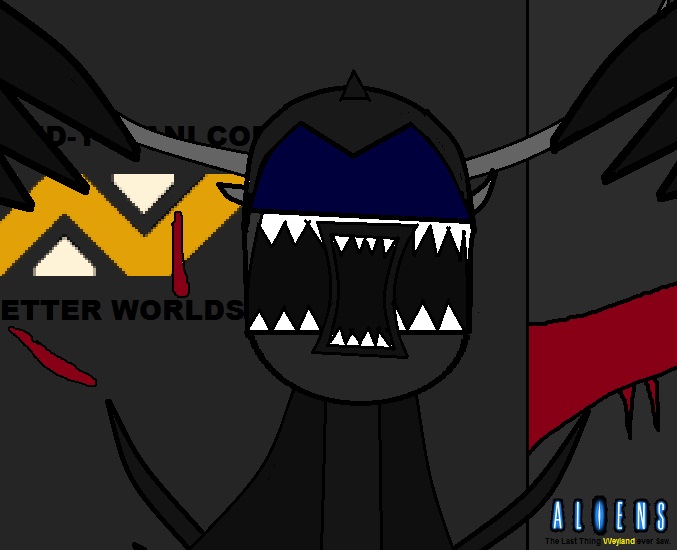 It's not often that i do a Xenomorph Piece with a Straight-Headed shot.
I think i draw these guys better in the Angled Sense.
This is also the first time i've experimented with the Xenomorph.. Tongue? Inner-Jaw?

I've heard both terms for the Xeno Tongue thrown around before, so i wasn't sure which one to call it.

But Yes, This is kind of a Sketchy Piece, Mostly because of the (Low-Skill) "Blood" in the Background.
Which, for the purpose of this piece, Is supposed to give you the idea that a Violent Attack happened prior to the scene currently being witnessed.


So, what is the story behind this piece in particular?

Specimen Ninety-Four, born in 2194, was not only Weyland-Yutani's most remarkable Specimen, but also their most feared.
He was born under the Surveillance of Company CEO Frederic Weyland.

From Birth, the Xenomorph was known to be full of surprises, being born from his host in a totally unexpected place.

Most Xenomorphs born under Wey-Yu captivity are known to be born from the Chest area.
This would not be the case for Ninety-Four, as he would be born from the Lower Abdominal Region.
Suggesting he possessed remarkable levels of intelligence, if he knew, or perhaps sensed, that he would be captured upon birth.
This allowed him a Brief Escape before his Eventual Capture.

Following this, he would be subjected to Tests and Experiments that, even to this day, Weyland-Yutani does not want to disclose.
He would evolve into a Warrior Xenomorph in Captivity, before later breaking out with family.

During his time out of Captivity, he would be allowed to further change into a Praetorian, before, during the course of 2195, he would unexpectedly metamorphose into a Rare King.

Not only did this allow him to create his own hive, but the change made him Larger and Stronger, which of course resulted him in being more feared by Weyland-Yutani.


But then there had come a point where it seemed they were no longer seeing any sign from their Adversary OR his Children.
Everyone working at Wey-Yu knew that it couldn't be a good sign.

This period of uncertainty went on until 2197.

It came to a point where it seemed maybe Specimen Ninety-Four had given up on attacking Weyland-Yutani, and people were actually enjoying the Change.

However, Perhaps this would be a bit premature on the Company's Part.
When Today, our fateful day, arrives.


Weyland had been busy with a Project, when he realized his Staff had become oddly quiet.
He swore earlier he heard some kind of banging or distant booming sound, but figured it was some cosmetic work being done on the Facility.
Which would make sense since he knew he had such an Operation scheduled.

But was was concerning was that, If it had been the result of Cosmetic Work, we would be hearing more activity from his Staff Members, not less.. or none at all, for that matter.

Confused, Weyland stepped out of his office.. and was dumbfounded by the scene he saw next.
His Staff.. they were.. well, it was a mixed bag.
There were many that were Dead, or had taken quite a beating.
Those that were dead were either torn apart, pulverized, or had wounds indicative of chestbursters.
The Carnage was severe, as indicated by the blood stains on the walls and floor.

Weyland knew right away that were was a Certain cause.
And the cause had to be none other than his Adversary: Specimen Ninety-Four.

But how?
After it seemed like he had given up or flat-out disappeared?
Unless.. It was all part of his plan?
To wait, getting Weyland-Yutani into a False Sense of Security, and when they thought they were in the clear, strike?
Could the Xenomorph King himself truly be that brilliant/intelligent?

It was clear that he had come back to dish out one nasty plate of revenge.

And then, when the situation couldn't already seem like a nightmare, Weyland turns, and is suddenly slammed against a wall by the great strength of his Adversary: Specimen Ninety-Four.
Leading to the Scene being shown visually.

He is pinned to the wall for a minute, before Ninety-Four grabs him by the head and lifts him up a bit.
Not really allowed any real time to react, all Weyland could do now was watch as his Adversary ANGRILY extends his Tongue/Inner-Jaw out to him...

But what really happens next?

Is this really the last thing Weyland ever saw?
Does Ghost/Specimen Ninety-Four finally succeed in Eliminating Weyland once and for all?
Or does something unexpected happen instead?