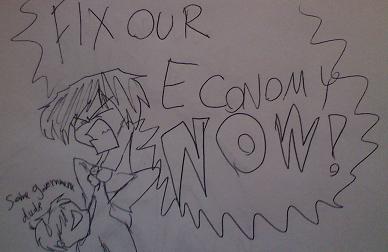 Krist Novoselic is (c) of himself

The economy is still in shambles I guess. :/
He should defindently do something :D That'd be pure awesome.

LOLOL his expression is super someawe! I really like how you did the teeth and the eyes. Exaggeration is the fun part of cartooning =D hehe... But the president isn't in charge of the economy ^^' He doesn't really have as much to do with it as everyone thinks. Whenever someone says they voted for him because of the economy, I think, "Well, I guess you don't know why you voted then XDD!" There are lots of reasons to vote for the president, but not so much the economy.

lol, my sister commented on the teeth too. She said, "Woah, look at those angry Krist teeth!" Or something like that. :/ but yeah, like I said before...I don't know that much about the whole government thing. lol that's partly why I put "Some government dude".

XDD niether do I. All I know about it is what my history teacher has told me and I've always hated history until this class, so yeah XDD! I suxorz at politics XDD!

lol, apperantly not though, only a person who is good at politics can make a comment that long about it!

I'm sure Obama's doin' it as fast as he can. xDD

hehe... I appologize for this rant in advance.
Obama can't do a thing about the economy ^^' XDD! I'm sure if he could wave a magic wand to patch everything up, he would do it faster than you can say wtiutcernhcuf, but he kind of can't. I've never been good at politics and history, but this is what I know about value of an economy in general. That happy green piece of paper you have in your pocket or wallet (it may or may not be there XDD!) is worthless. How do you know it's worth the number is says? Because the economy says so. Well, why does the economy say so? Because we trust it. In short, if you have a $5 bill in your pocket, the only thing that says it's worth $5 is the economy. How much our money is worth is based only on how much we trust out economy. If we didn't trust our economy, that $5 bill would be about as useful as wads of paper to throw in the fire. Kinda scary, isn't it? In the 1800's and early 1900's, they used gold, which was better because gold's value didn't depend on the economy. If you have a gold coin and the economy collapsed, you would still have a gold coin. Then they switched to paper money gradually and everyone thought it was risky and dangerous. And they were right =D
Now then, there are a few politician folks who say that the economy is as bad as it was durring the depression and they're telling ppl it's going to get that way, but you can sleep well knowing that it won't. The reason for the depression was pretty simple and it wasn't the stock market cresh that caused it. Put simply, the government was made up of a bunch of dingbats LOLOL! Nowadays, the economy depends on a wide variety of sales, goods, ect. Back then, it depended solely on cars, buildings (houses), and consumer goods, which are all luxury items that people aren't going to buy in a time of crisis. That's like an upside down pyramid! Another cause was unequal distribution of wealth. Basically, you've got a ton of poor people, a lot of middle class, and a lot of rich folks. The rick are pretty much the only ones that can afford a new car, housing, and luxury items, so that's like another upside down pyramid! Kay, so we've got two upside down pyramids stacked on top of each other. Hmm... I wonder what's going to happen... The economy was destined to fail. And it did XDD! It hit absolute rock bottom, they were at total zero, it couldn't possibly get lower, and that's all folks. Banks failed by the thousands and, for the ones that didn't fail, everyone pulled their money out and ran because they didn't have a lovely little thing called insurance that they have nowadays. If the economy fell now, you would get your money back, they've got it so you get everything back under 200k. If you've got more than 200k, you might want to spread your hundreds of thousands across other banks (and give me some o that XDD jk!). However, durring the depression, is was, "Sorry, we don't have your money." "Why not? Weren't you investing it in houses like you were supposed to be doing?" "No, we played the stocks with it, so it's gone; it dissappeared." "Where mah money!?" And that's how it went LOLOL! But that won't happen for a plethora of reasons YAYY!
And, at last, we come to the conclusion, how to get the economy back up. Well, it runs on consumption. Buy stuff, yeah, that's right. And what's Obama gonna do to get people to buy stuff? Well, there's a lovely tax break. Yeah, he's giving you money so you'll spend it, that's what it's all about. However, people aren't spending it, they're hocking it into savings because the economy is bad. Well, that kind of makes it worse. Think of those Chinese finger handcuffs. You put them on your fingers. The more you pull back, the tighter it gets. And that's what's happening. The only way to break it is to pull in. Well, no one wants to pull in, it's risky. "Let the other guy pull in, I've got a family." everyone will say, but the economy is like a downward spiral, it takes a lot to break it. The worth of a dollar is based on whether or not we think tomorrow will be better for the economy. Seeing as how we don't, the economy is getting worse. It's a self-fulfilling prophesy. In order to save the economy, we have to THINK it will get better LOLOL!
Now, if singing "The Sun Will Come out Tomorrow" would fix the economy, I would love to! Unfortunately, that won't really help. However, if I could get 100k people o sing it... then we're getting somewhere! =D

If you have actually read all of this, can I please hug you? *cling* If you already knew most of it then YAY! If you didn't then YAY! Now go spread the word that complaining about Obama won't fix the economy. I didn't vote for the man, but I'll defend him against untrue judgement. =D

Holy crap, you know your stuff, girl. And I did read all that, go me! 8D
I applaud you.

Ohh thank yous both! *clingy-nessnessness* I feel intelligent even though I pretty much just learned all of that recently from the first history class I've ever had that didn't suck XDD!

holy crap! O_o; some one knows a LOT more about government then me! lol, then again everyone does.

let's hope! Just like Krist had said, who knows how long this "Honeymoon" phase will last.

Wao, that was loooooooooooooooooooooooonger than I thought it would be XDD! Well, if you want to know about the economy and how to fix it, it's a lot shorter than anything else you'll find =D