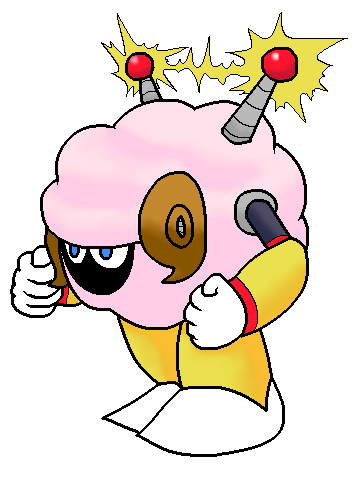 "Do Androids Dream of Electric Sheep?"

Blech, I need to grasp the concept of shading again.

So, I shall be starting a bit of on art project, concentrating on Mega Man characters. Basically, I try to draw most of the characters and throw a little critique on their design or what have you. I'll only be drawing the ones within the series I have played, which includes the classic, X, Battle Network, and Star Force serieses... and so forth.

And with Capcom announcing Mega Man 10 I supposed it was appropriate to start with Sheep Man.

Design:
I'm not sure what to think, really. It's straight and to the point, but it seems a bit on the half-assed side. Take a little cloud and give it arms, legs, and horns, and call it a sheep. He kind of looks like a cross of Cloud Man and Bubble Crab, really. Also I hate how they photoshopped Hornet Man's legs onto his official art.

I'm not sure if I like him or not, he was enough to make me think the scan of the article was fake. (I don't subscribe to Nintendo Power anymore, mind you) He's grown on me a bit since his first impression, but I dunno what to make of him now.