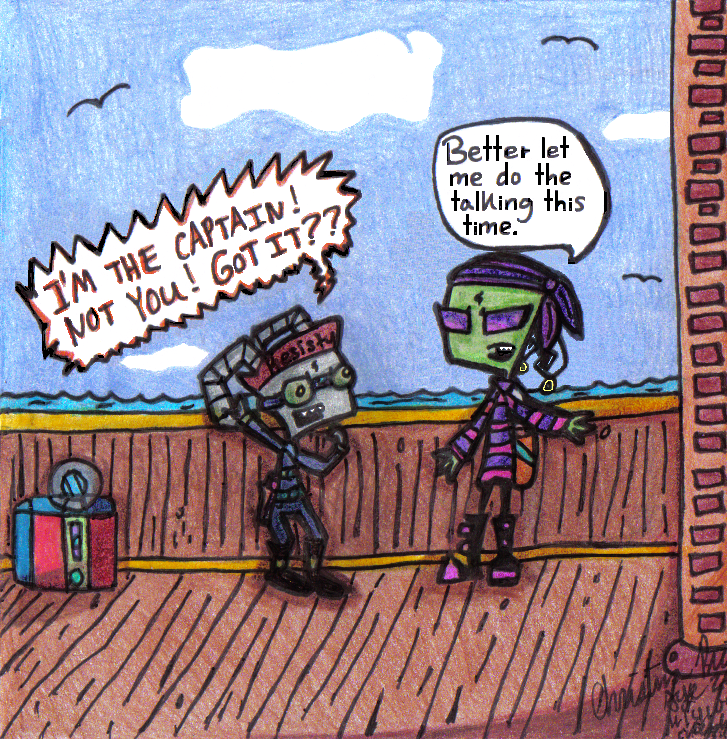 Check out TALNR-Club.deviantart.com/ on dA to join the Tak and Lard Nar Romance Club! ^^

Tak: Better let me do the talking this time.
Lard Nar: I'M THE CAPTAIN! NOT YOU! GOT IT??

Yay, this is finally done. I've been wanting to color it for ages and so I actually got around doing that two days ago. This pic was inspired by a random live action rp I did with my sister forever ago. We never finished it just like many others, but it was fun. It was about the Resisty, Zeec, and Tak going up against Jack Sparrow, Zim, Dib, and possibly Dana. But I don't remember. Chet, Biz, and Meania were probably involved somehow. And I may have thrown in Elizabeth and William. XD

Jack did a number on the other ship due to something Lard Nar did or said. I think he offended him somehow. When the two ships happen to meet again, Tak tries to get Lard Nar to let her talk to Sparrow so problems don't arise again. I think she ends up winning the argument, but this was over a year ago that we did the rp so who knows. Haha! We get bored easily.

Woot, this was the first time I've drawn Lard Nar all angry like that. Just the fact that they're arguing is hilarious since I don't usually see their relationship as an overflowing pit of gurgling lovey doveyness, especially in the beginning. I think it's in their natures to be argumentative, and unlike other couples who argue too much and break up, it's the opposite for these two. Arguing is just their thang. ;)

I love it. The colors and background are really nice. I'm also fond of the shading. The weird box thing was supposed to be a cannon, but it kind of mutated into a weird box thing. Maybe it's a weapon or someone's lunch, haha! I love Tak's outfit and Lard Nar's Resisty hat. That hat actually took a few tries to get right, as simple as it looks. The ladder thing is supposed to lead to the mast. I wouldn't want to climb those steps! And yay, the sky wasn't completely mutilated by my scanner! XD