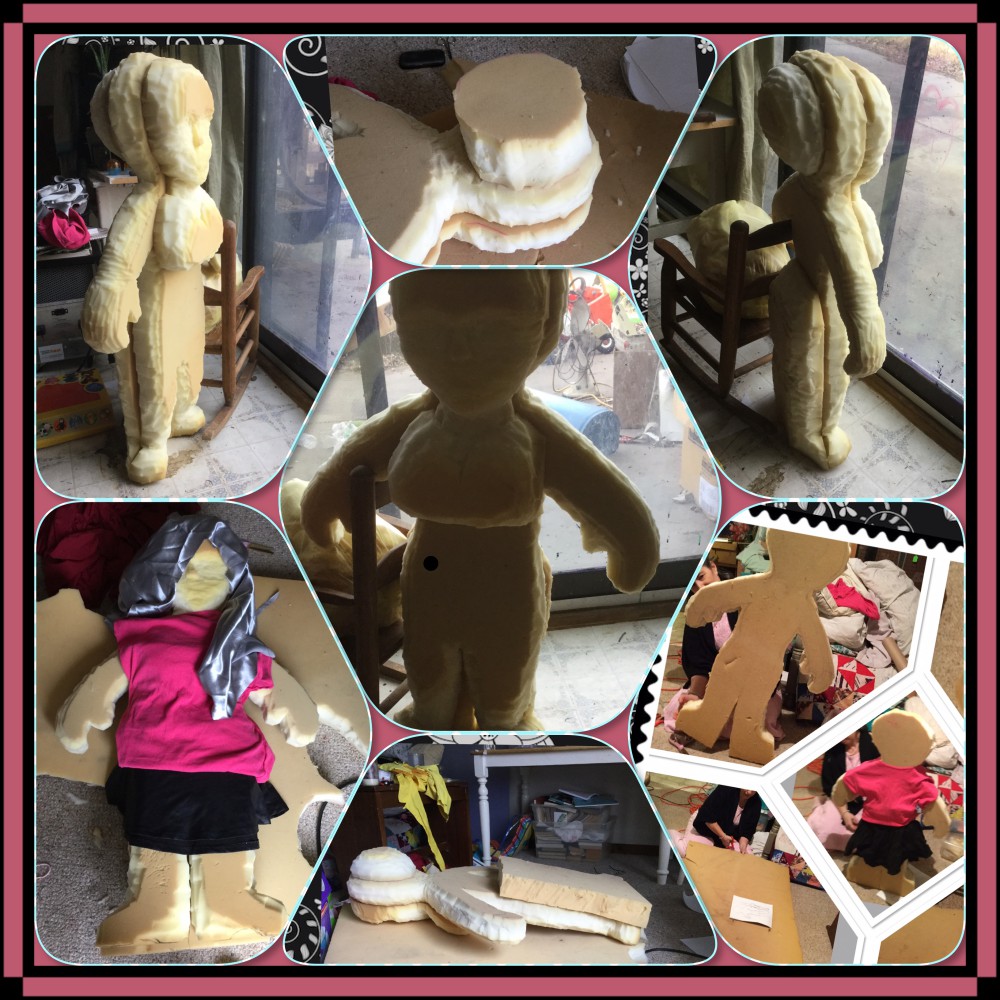 wip of the large foam doll I am making because Lin asked me to for her Meliodas cosplay for Nakakon which is less than two weeks away and I've hardly done anything on most the cosplay stuff I should be making, as usual.

anyhow so I got this rough cut a few days ago and finally got her glued today. I think she's very ugly myself but I'm really excited about this project because It's the first time I've tried a really huge foam sculpture, and glueing the foam together, and the media seems to be working well for me even though I don't like the look of this doll so far,

SOOO...looking forward to using what I'm learning on her to make something really good.

this shows random wip and the current shape of her standing by a window. the lower left shows her clothes she will be wearing.

how carved does she get before I ought to mark this a nude? [my concern then being I can see it because I filter out nude] perhaps I should paint on some undies like they do on some barbies, the Meliodas would have a hard time stealing them...ick....why do I love this show when the main guy is such a perv?

today hopefully I will make a Vocaloid Len Alpaca sleeper suit,Vocaloid RIn alpaca jacket and the outfit of King for the seven deadly sins, figure out the design for the pillow form of Chastiefol, and ...whatever else I ought to be doing asap....

been a crazy week with my husband and stepson in the hospital and my son and grandson having birthdays and out of town visitors and such. Had to go to topeka for a party wednesday, worked out well because we found a good wig for Len.

cosplay is a lot of work I have to remember it's for fun, and not let it become stressful.

photographed on iPad and collaged into one image on photo scrapbook app which used to be called instascrap and has changed since then so I don't know my way around it well anymore.

Coming along. :) I like the facial carving, myself.
And while the site's Official Answer would have to be via mod, I personally think that as long as you're not seeing more detail than you'd be able to see through two layers of opaque clothing, even if you don't have underwear outlined you should be fine.

Thanks. Lin thought her face was still too flat, so I'm going to care it more, so I hope I don't mess it up. I've decided I'm going to paint the skin lightly and paint on the eyes and mouth.
yeah... I agree with your judgement, I do think I'm going to paint on underwear however, because the show makes a big deal about Meliodas trying to steal her underwear, so it's an important part of the character in a way, and besides she's going to be wearing a short skirt and people might well see under it. I don't want to sew underwear, although I suppose I could buy little girl panties at walmart or something.

Indeed, cosplay is a lot of work. But, is ultimately well worth all the hard effort in the end. I like the added definition. I especially like the face carving a lot; it looks really good. Definitely coming along. I look forward to its completion.

IDK how your husband and stepson wound up in the hospital but I hope they get well, and I hope that your doing well yourself Jadis.

Thanks, I carved a bit more on her today And I do think she's starting to look better. Her legs are thinner now. Lin wants me to carve the face more  to be less flat, SO I hope I don't ruin it. LOL. I've decided I'm going to lightly paint all the exposed skin surfaces [face neck arms and legs] and paint on the eyes.
both of them end up in pretty often. My stepson has heart problems and my husband has a little bit of everything. I'm doing great. having fun with my cosplay. thanks for your concern.