Sen'tran Jr and Arrow by Jadis 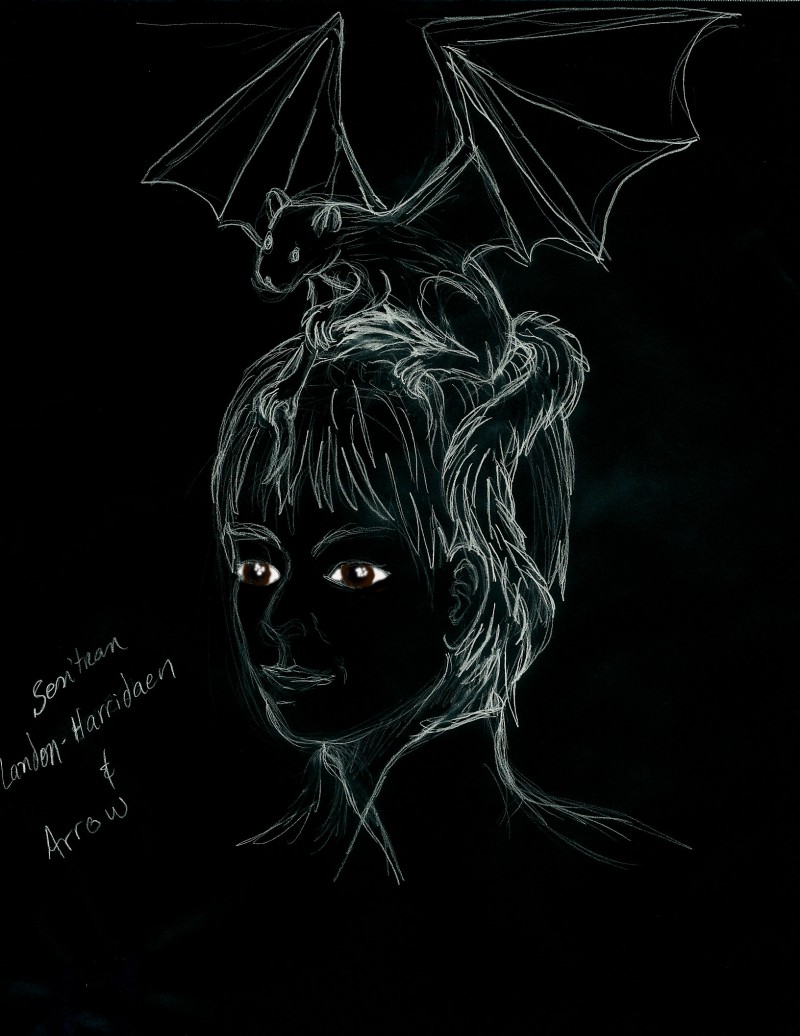 Pencil sketch, scanned and inverted with I think photoshop, I also recolored the whites of his eyes with photoshop.

the description of that on DA gives some info on the characters. it is obsolete because Tark's name was changed to Lenn and Quetzal's real name is now Shae. both of those might be a better middle name.

Arrow, the one with wings [a dragon ferret, also known in the port city of Jai-ten as rat-pigeons] , is the son of an important character called Marrisyl. Arrow's name derives from him having been born on a space taxi ship named the Light Arrow.

Arrow is standing on the younger brother of Harris Jenzar. Harris is the Paragangian secondary protagonist of the series, more or less the sidekick of the primary protagonist Jason Scott-Harris, although Harris is probably the more interesting of the two.

one of my earlier efforts to create an image of a person with all black skin and hair. now that I have this on my computer I might get out the drawing tablet I found and try shading it. which on an all black image would actually not be shading but highlighting, right?

inversion is an interesting technique.

more random info on this story is found on Paragangia wiki [a probably slightly abusive use for wikia, but I organize some of my story info there primarily for my own use]

nice, so im waiting for a few days

that's right, but you are top of the list for drawing, and I'm thinking about how I'm going to draw the transformation. and I might do more than one version.

thank you very much

Inversions usually yields some awesome looks. Which is definitely the case here. I quite like the little ferret dragon known as Arrow.

Arrow and his mother are my most popular original characters, since most of my characters are pretty much just people and don't look all that interesting. seeing this again makes me want to get back to trying to color Paragangians.... and to trying to draw dragon ferrets because I had not spent any time with ferrets when I drew this, and now I have ferrets and understand ferret anatomy [actually this might have even been drawn as far beck as when they were called flying squirrels instead of dragon ferrets, although the anatomy for that is just as wrong]