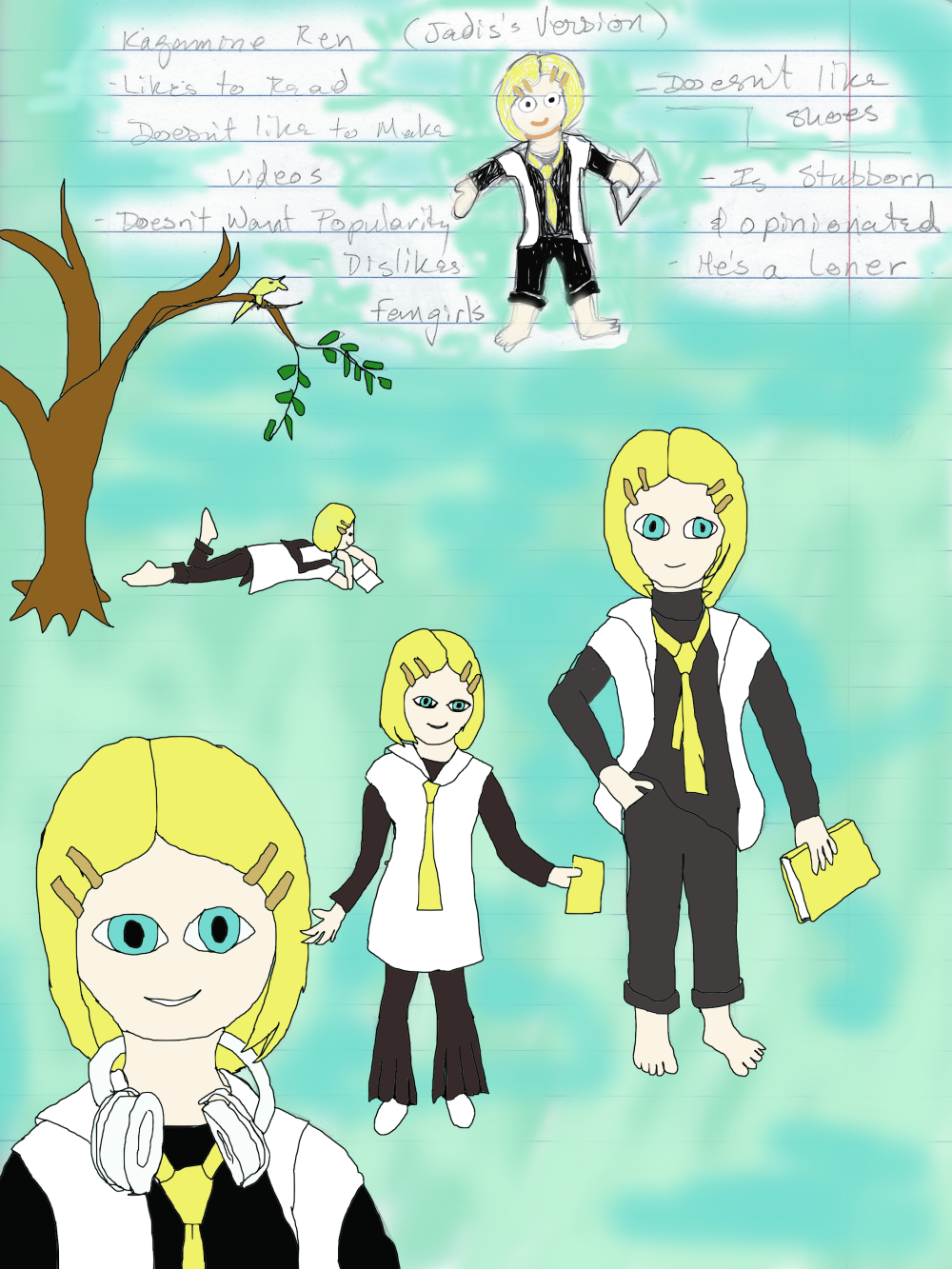 in my daughter [Lin Kagamine]'s imaginary vocaloid word there are 3 sets of Kagamine twins, one older than in and len, and one younger. this is the boy one of the younger twins, who are supposed to be about 6 years old.

Ren belongs to Lin, only this is my twisted version not hers. she wants me to play this character for her all the time, and I do, so I developed my own Ideas of what he's like which she doesn't agree with.

other information not listed: he likes Rin better than Len and insists of wearing clips like she does to keep his hair off his face, refuses to wear a ponytail like Len. He doesn't like wearing his head phones [not wearing head phones is tabu for vocaloids, they always wear them unless they are sleeping]

He got the personality he has because when the creator cloned Len and Rin's Data Rin was sleepy and in a bad mood and didn't want to do it. lIn on the other hand came out hyper and reckless because Len was so enthused about the Idea of getting new little siblings.

edit: I forgot to mention, this was drawn on lined paper with pencil, which is not allowed to post here, and I like the lined paper and pencil version much better than this version, personally. and I colored this very lazy. I dunno why I bothered....but i did so I posted it anyhow.

I'm bipolar and I get a little weird when I go manic and I'm slightly manic the past few days. so I get very obsessive about odd things for a short time. AND I talk too much.
BUT that said, I have always loved lined paper. I love grid paper of all sorts too, and Hex paper is really amazing. music paper is cool too. I like patterns and structure, [scales, tiles, bricks, that sort of things], and lines on the paper sort of give that feeling, plus I used to write journals in spiral notebooks, so I did a lot of drawing on lined paper in those days. so it has a sort of nostalgic feel to it also and I love nostalgia. AND it evokes doodles on the edges of school papers, which was all that made school endurable in Jr high and high school [although I got in trouble for drawing on desktops a lot also]
I'm rambling. Manic. Sorry.
and. yeah vocaloids. I don't much like them. but I love my daughter and she loves them. and I cosplayed Miku from brave frontier, not so much as a vocaloid but as a brave frontier character. and because she has equal hair, which is my favorite color. and because it was an interesting challenge to build hair wider than my shoulders which  could still swing which I spin around
and I'm rambling again....LOL....

It is true that lines often detract from the artwork and there are times I really wish I had used plain paper for a certain drawing.
It is also true that light pencil on lined paper tends to be illegible when posted online...I personally deal with that by inking it or darkening it digitally. yesterday I found a nice tutorial on how to remove lines, but I don't think Fire alpaca has what it takes for that.
the key thing in what you say is desire to improve. Lined paper can be a great place to start. what kicked off this discussion was an illegible scan of a pencil drawing, by someone who really does try to improve. in that case, it is good to strongly encourage the use of better paper, but there are times when getting feedback on a sketch on scrap paper can be helpful too, when the sketch is at least legible, as that one was not.