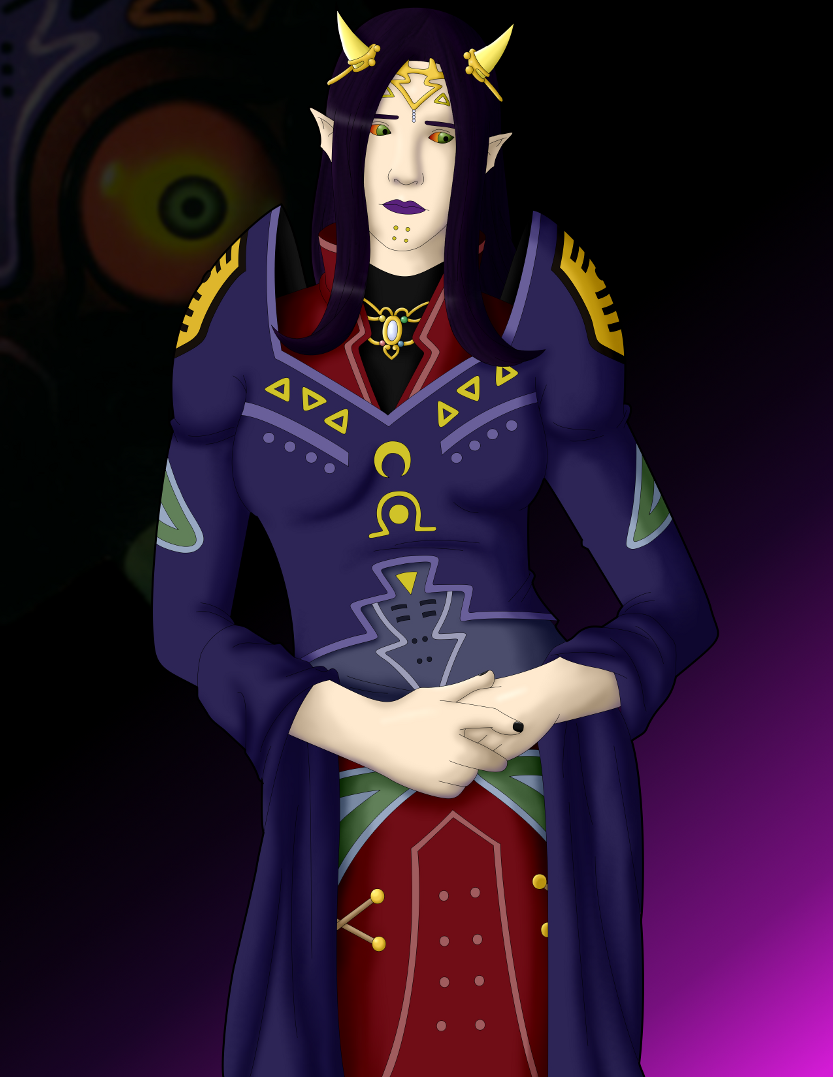 Majora is a central character to the Book of Mudora series, though her allegiances are shrouded in mystery. Thought to be only known in Termina, a few Hylians who belong to the secret sects that guard the true course of history know of her existence. Among them she is vilified as a goddess of death and chaos, something she does not refute.

How Majora was born is a mystery that the gods could never hope to solve. As an infant, Majora was discovered by her adoptive mother after a strange pulse of energy struck the Gods' Realm. When she was a child, a tragedy struck the Neithim, driving them to near extinction, and she vanished into thin air.

As the Neithim's city was repopulated and brought back to its former glory, tensions were mounting with the Angeli of the neighboring city, Aerias. To be more precise, it was their leader they feared, a battle-hungry warrior they called the Fierce Deity. As talks of peace failed left and right, the Fierce Deity demanded Majora come out of hiding and face him. When the inevitable happened and the Neithim and Angeli went to war, Majora resurfaced and the two were embroiled in a brutal battle.

But, a second pulse of energy struck through the Gods' Realm, destroying their home and casting its inhabitants into the void between dimensions. The Fierce Deity and his army broke through into a new realm but were quickly followed by Majora, and several other gods. Within this new realm, they were drawn to a world created by three lower goddesses, Din, Farore, and Nayru.

The battle wore on for three days, with many of the inhabitants of the infant world taking sides with the opposing gods. Their powers evenly matched, Majora saw only one way to end the fight. Calling upon her allies for help, Majora was able to strip a vast amount of power from the Fierce Deity’s body before sealing him away inside a crystalline prison and casting him deep inside the planet. But, these actions consumed too much of her energy and so, along with the Neithim, other gods loyal to her, and her human followers, Majora fled to north and split the world into two parallel dimensions. Majora could no longer carry on and granted her followers protection as her body vanished from the world.

Generations later, one of the Angeli rediscovered the Fierce Deity’s stripped powers and encased this immense power within a mask. Breaching the dimensional barrier, he found a tribe of shadowfolk who worshipped Majora, creating a mask from the power she granted them. This Angelo stripped the powers of protection from the mask and, when it came into contact with the Fierce Deity’s mask, it was twisted into an object of pure chaos that would wreck havoc across the newly found lands of Termina. Not long was the rampage before both masks were sealed by the remaining Neithim.

Ages have passed and the story of the war between these two gods has faded from history to become nothing more than a fairy tale told to children. Little do they know, the Fierce Deity still slumbers beneath the earth and Majora exists somewhere in the world, biding her time until she restores her strength. The day is quickly coming when the dimensions will reunite, signaling the return of these two gods and all races will prove powerless as Majora and the Fierce Deity seek to end the war they started thousands of years prior.