The Biginning by Kathna 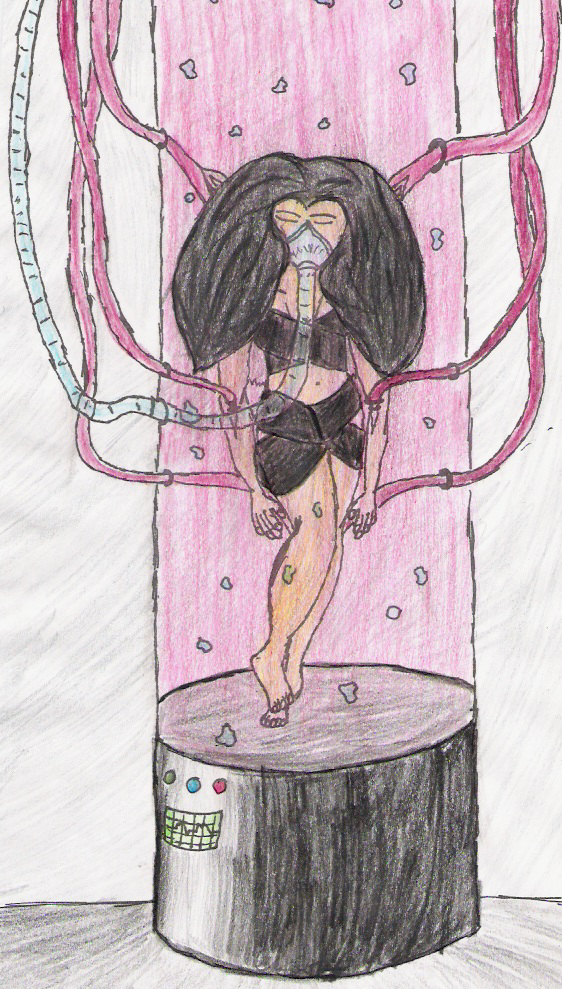 Silence met this thought, which was an odd occurrence in Lauren’s head. Something always followed a thought, but this time she could not answer herself. Her head hurt, she felt lukewarm, and everything seemed to be everywhere and nowhere. A struggle to make something happen forced a muscle to contort, twitching and finding something to stop it from moving. She shook her head slightly to find two more points in her skin, upon her back, that forced her neck to keep still without little pins and needles causing her pain. Hair brushed her face in a way that seemed unnatural for just laying or standing somewhere. Like being under water…

An eye struggled open, fighting an unknown force. The pain in her head increased as her eyes met what she was floating in, a faintly pink liquid. It didn’t hurt, but it didn’t feel good. It just was, like the feeling in your mouth after you’ve gotten a shot of Novocain from the dentist. Numbing. She great effort was put into moving her eyes to look at her surroundings, beyond the glass that was in front of her face. The ruling question in her mind was ‘where am I?’ as it had been when she came around. The numb feeling was ebbing away to give way to a dull ache that penetrated her whole body.

Her head jerked painfully as the ache increased, pulling back and feeling that tension again from her shoulders. She looked about again, seeing something she didn’t like. Looking up, she could see nine tubes running from the top of her wet prison, one of which was clear, the other eight running with a dark substance. The clear one was strapped to her face, oxygen, and the others were at various points of her body. The two she couldn’t see were stuck in either shoulder, the other’s as follows; insides of her elbows, insides of her knees, the back of her ankles. She pulled against it, biting back a cry she would scream into her mask under other circumstances. What the hell was going on? Where was she? Where was Chelsea? She had to know, and now.

What in the world is wrong with me? More color it seems. Strange. I thought I didn't do color. Apperntly I am wrong. This is an orignal concept before I started writing my Jak II fanfiction. I drew it about a year ago, and it was ruined when I attempted to color it. Once through the scanner and reprinted in black and white, I tried agian and it came out well. ^_^

Thank you. I'm working on the sequel right now. XD

cool can you tell me when you upload it?