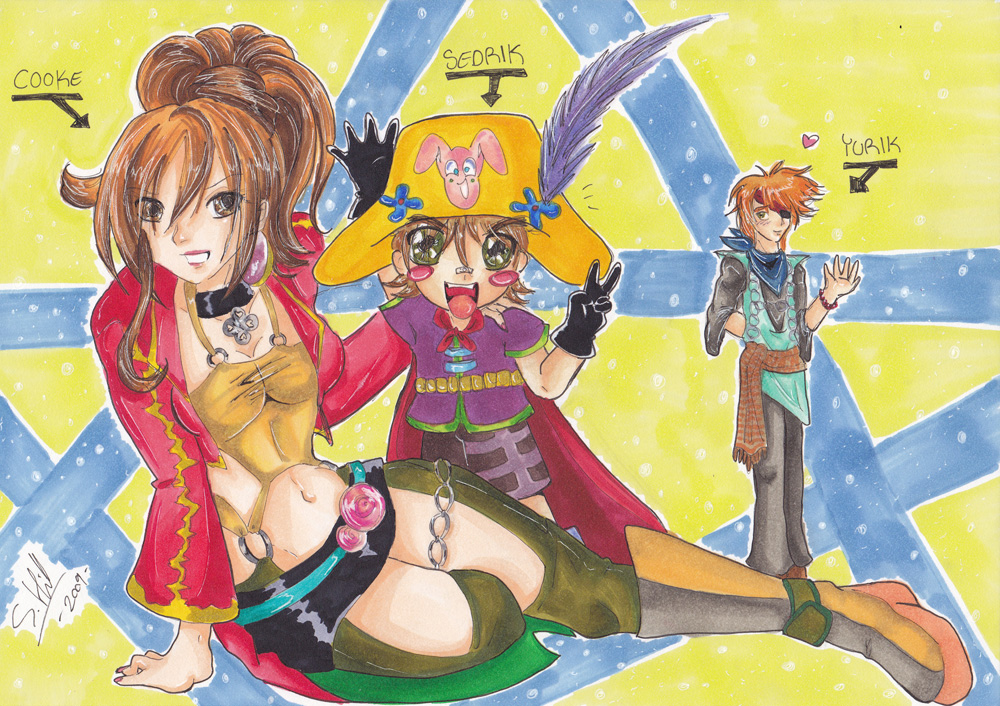 Another Lost Odyssey 2 piece; this is grown up Cooke, with her 4 yr old son Sedrik and her husband, Yurik. Aint she just a yummy mummy? ^_-

Cooke has been captain of the Nautilus for the past ten years, and isn't going anywhere anytime soon. She took over captaincy when Sed retired, and advertised the position. 21 yr old Cooke wasn't the most desired applicant, but she was the loudest.

Yurik hails from Saman, born into a family of successful fishermen. He is a quiet man, who easily blends into the scenery, and has a heart filled with unbound kindness.

Being not the eldest son, he felt free to pursue seas away from home. When he applied to be a crew member of the Nautilus, he didn't expect to be made First Mate. Captain Cooke was firm in her belief that he was perfect for the role - for he was the only one who looked like a pirate, with that eye patch. Yurik was bewildered, but happy to have a job.

Several years later the pair married. During the reception, Jansen and Tolten assured Yurik that their ports were always open to him, and they would guarantee his safety on the likely chance that Cooke becomes unmanageably hostile for no good reason and takes it out on him. Yurik didn't know how to respond, and just quietly thanked them. Of course, their guarantee was follwed up with another one - in the event that he breaks her heart, their navies hunt him down so Kaim can beat him within an inch of his life, and Mack gets to finish him off. It seemed fair.

Sedrik's name is a combo of Sed and Yurik. He is the ship's mascot and demands attention. The young master sits by his mother, nodding as she hands out commands. He tells people he is the First Mate, though this is because his father tells him he is his First Mate. The child is quite obnoxious, very loud and doesn't get along with Prince Seth of Uhra.

During the story, Cooke is reluctantly introduced to the party by Mack, and they trust her to safely ferry them across the sea in secrecy. Later, the Nautilus is sent on an expedition to locate the missing Tolten, and goes missing itself. Naturally, the party detours from its mission to stop the Cult of Gongora's evil plot to rescue family and friends.