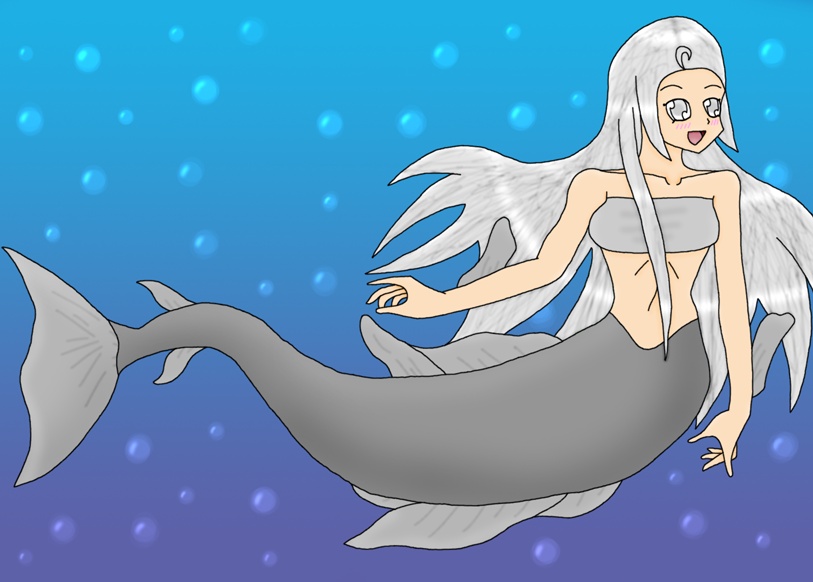 Alright, I drew and colored this in March of 2010.

I referenced this from a picture in a “How to draw anime” book my best friend was borrowing from another friend of ours who was borrowing it from our school library. I drew it when my best friend was over one day and we decided to do some art exercises by referencing pictures in the “How to” book. The actual picture was a very mature woman probably in her 20s or something, so that’s why Sakura looks so mature in just about everything but her eyes and hair.

I don’t like the tail style in Mermaid Melody very much because it’s not very realistic. It looks like a giant piece of fabric or blanket and that bothers me. So, I decided to make it more realistic by following the reference. In actuality, Sakura doesn’t have fins on her arms. That just came with the reference. But she does have them on her tail.

Anyway, in the comment box of my Chibi Mermaid Atina picture, I said I would later be posting the very first time I had ever colored bubbles. Well, this is it. I’m SUPER proud of them and I love my bubbles, so don’t criticize them or I’ll be forced to sic my yami on you and she’s not very nice XP

So yeah, that’s my pretty mermaid picture of Sakura, though it’s obvious she’s not wearing her shell necklace (not sure why it’s a shell necklace when she’s an elf. Oh well, maybe it was a gift from Aqua Regina XP). Oops, my bad.

Wanna play a forum based RPG Naruto game? Then join Naruto Sagas, where you can join a village, roll for a bloodline, learn jutsu and compete against other ninjas!. Just register at:freeto(Dot)b1(Dot)jcink(Dot)com

I love the shines in her hair and the bubbles. And her hands came out really good! :)

Thank you ^^ I have to agree, the hands DID come out really well. I'm proud of them. ^^

Hehehe, lol, that would be interesting indeed. Thank you ^^

I think the bubbles are amazing. :)