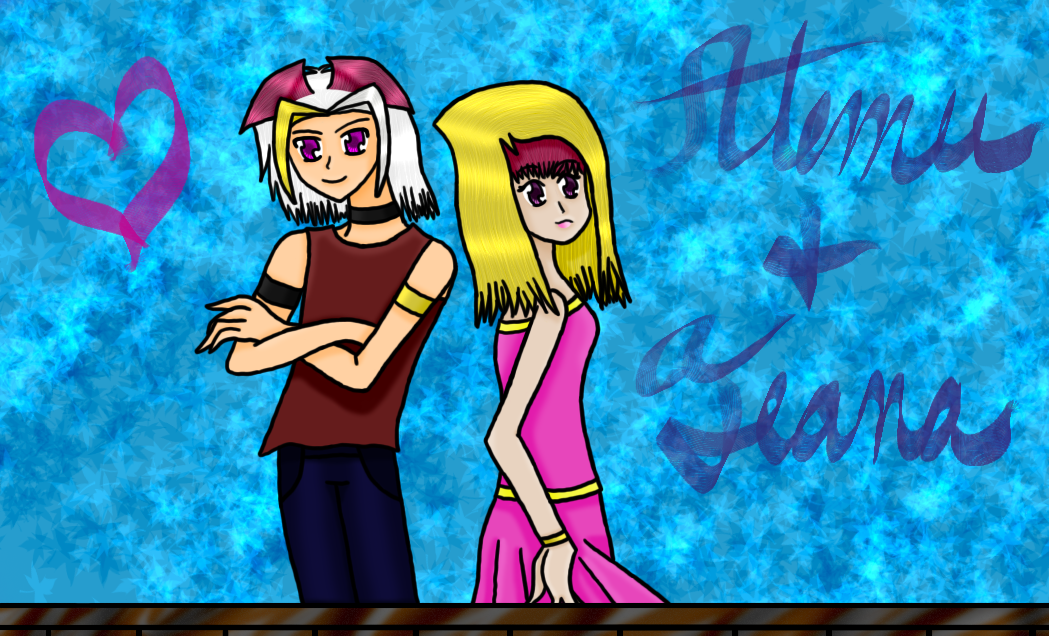 IMPORTANT EDIT AS OF 5/31/2011: These characters, formerly Atemu and Teana, have been renamed Dhamen and Keiko, respectively. Disregard the names on the righthand side.

Second and last picture of the day. Woo hoo *totally unenthusiastic* To be honest with you, I totally have a ton more pictures, but I refuse to post them, so, in your face. Not that anyone cares.

This is one of my second generation pairings. Let us all hope you recognize the boy on the left. That would be my own Dhamen Bakura, son of Kel and Bakura. Yay. The girl on the right is someone I haven’t really introduced properly before. She’ll eventually have her own bio page when I’m in the mood to get one out. For now, you just get my little spill.

The girl in this picture is Keiko Moto (age 17, height 5'4"), daughter of Anzu and Yugi. She has Anzu’s hairstyle, but her colors come from Yugi, the blonde (though a little modified by me), the red, and the plum for her eyes. I don’t remember where her skin color came from. I think Keiko has Yugi’s while Sakishoota has Anzu’s. Yes, Keiko is Sakishoota’s twin sister. Her pairing (obviously) is with Dhamen and her best friend is Dhamen’s twin, Amane (whom you guys haven’t ever seen before). She has no singing or dancing ability, but she can act and wants to be a famous actress. She doesn’t like plays or musicals and would rather be in movies, but she’s talented enough to manage the lead in all the school plays despite her lack of musical ability. Like almost all of my second generation, she’s a fighter, but not as talented as some of my other SG OCs.

So that’s just a little information on my pretty Keiko. I like her even though I haven’t had much drawing nor writing experience with her. I hope to rectify that in the future.

I love FusionShipping and I definitely support it. I hope you all can too, at least a little bit. And for you anti-RevolutionShipping fans, this is nothing like it, I promise. I would rather I didn’t get comments about that. I’m not a fan of RevolutionShipping either, but I don’t hate it.

The background was me having fun with brushes. Again. That brown and gray thing is supposed to be a brick wall of some sort. I wanted a realistic background. I failed. I like it anyway. Except maybe the wall. I don't really like the wall. But I like the blue background. Yay me.