Bring it On! (collab with YoriXYamiForever)

Bring it On! (collab with YoriXYamiForever) 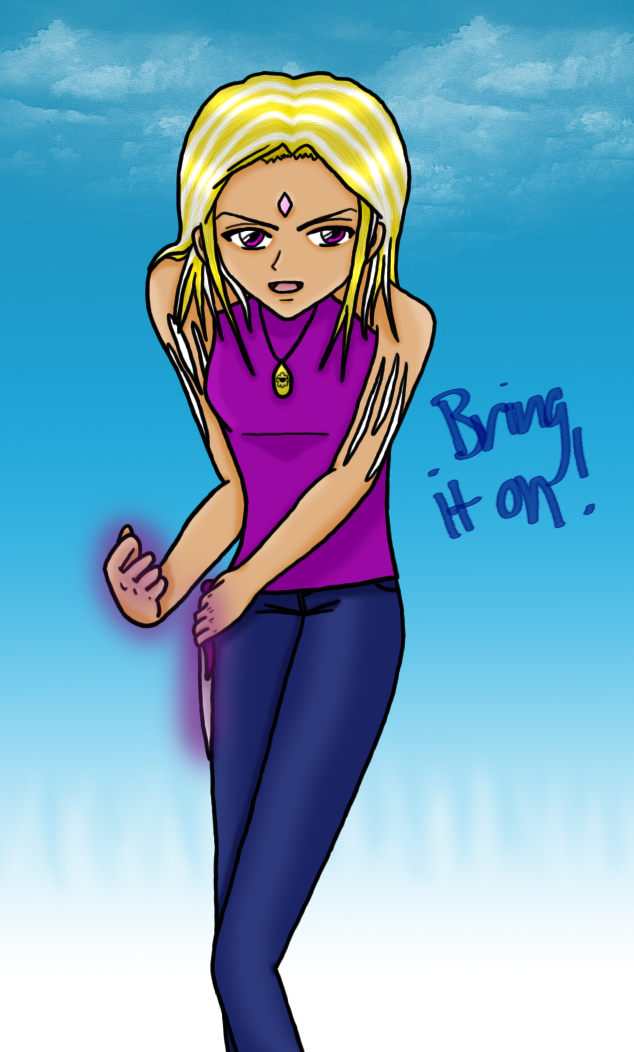 Even though I seem to only get comments on my canon pictures and Indy still hasn’t contacted me (part of me wonders if maybe she doesn’t care anymore XP), but I guess I’ll post some more OCs pics anyway. I’ve got six pictures to post and if I ever color the seventh, I’ll post that one too.

Anyway, this particular picture is one I did not draw. We were bored at school one day and she wanted to draw so I lent her my sketchbook and voila, she drew Kel inside back in February of this year. Woo hoo. I decided to challenge myself to color it (even though I didn’t have permission, I just said I would, which means it’s a good thing Wulf-chan didn’t mind XP) because her style is complicated and with a sketch like that, it was going to be hard (not to mention I wanted to color my own OC since I hadn’t drawn a picture of her myself for quite some time (I may have recolored a few old pics of her, but the last time I’d actually DRAWN her was back in December of ’09)). I colored it last month.

I had fun coloring it, though I gave up for a couple months because at first it was a little too complicated for me. After having colored an additional 7 or so pictures, I decided it was time to try again. I finished the lineart, started on the coloring, finished shading and highlighting, then sat there and stared as I struggled to come up with a background. A few looks at some YuGiOh screenshots I had on hand gave me enough inspiration to get that background, though it’s not as accurate considering the screenshot I referenced was a headshot. Oh well.

Some new things concerning Kel—through Wulf-chan’s brilliant designing skills, I’ve lengthened Kel’s hair, figured out how I’d like her streaks to look (I was following Wulf-chan’s lines here, the finalization I’ve mentioned will be shown in a later picture), decided to keep her scars visible and show them on every picture of her I do, and darkened her skin. Other refining I did was done previously (the Crystal instead of Millennium Crystal, personality, her dagger, her magical ability, etc) and some of it is shown here.

Now, concerning events in the picture, it’s rather obvious Kel’s getting into a fight with magic users because she’s activated hers (hence the glow) and she has her dagger out. I don’t quite know the circumstances that Wulf-chan had in mind (I’m pretty sure she didn’t have any, actually), so I’m just making a guess based on what I know about my own character.

I hope you all like and I plead with you to comment. It makes me feel better to have comments.

Now that looks pretty awesome! I love her hair as well!

Thanks very much ^^ I personally give most of the credit to Wulf-chan since she drew such an awesome picture, but if I did that, I'd have people on my back concerning my own coloring skills ^^0

Thanks. I'll be sure to let Wulf know since she drew it.