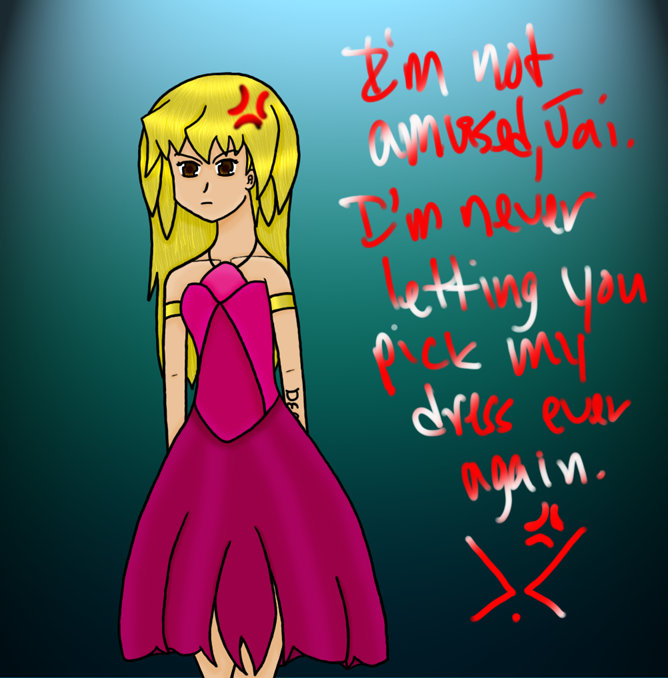 I’m just going to jump in with this one. I’m too tired to offer anything here at the beginning.

My dear lovely friends and fans (wait, I have those? I didn’t know that XP), meet Amane Bakura, Kel and Bakura’s eldest child. Well, close enough to eldest, anyway. She’s the elder twin. I’ll offer her bio and then discuss the picture afterward.

Name: Amane Bakura
Age: 17
Height: 5’7”
Race: 1/4 Elven 3/4 Egyptian
Family: Kel is her mother, Bakura is her father, Dhamen is her twin brother, Atina is her younger sister, Ryou is her uncle, Miho is her aunt (as in Miho Nosaka from Season 0), and Elora is her cousin.
Love Interest: Jai Wheeler, and their shipping is TwilightShipping
Ka: Grim Reaper Death
Items: Switchblade
Short Background:
- She attends Domino High and is on the school jazz dance team with Jai’s younger sister, Melina.
- Her best friend is Keiko Moto. They train together.
- She was once and sweet and innocent person, like her younger sister, but when her Ka manifested within her, her personality turned rather dark, similar to Bakura’s personality when he was possessed by Zorc.
- Her interests lie in war, blood, martial arts, death, and dance.
- Because Bakura recognizes his daughter’s personality as what was once his, he keeps an eye out for her. He’s very close to her and protects her. He’s the one who taught her everything she knows. Amane looks up to her father and prefers him to her mother.
- In rebellion to her mother, Amane, tattooed her Ka’s name, Death, into the inside of her left forearm.
- The knife is her favorite weapon and she enjoys getting into fights. She loves to use the knife on her victims and watch them bleed.
- She’s named after Ryou’s deceased sister.

Alright, now to discuss the picture itself. First, we’ll talk about the situation in the picture, and then the technicalities.

If you cannot read the words down the right side, this is what they say: I’m not amused, Jai. I’m never letting you pick my dress ever again >.< *vein pop*

If you haven’t figured it out yet, Jai has asked Amane out on a date. But not just any date. He’s asked her to prom! That’s why the background looks the way it does. It’s supposed to match the theme (whatever that is) of prom. It’s not like Amane doesn’t like the dress itself. It’s actually very flattering on her. What she is upset about is the fact that it’s pink. While that too looks flattering on her, it’s Amane’s least favorite color. She prefers red and black. Jai is probably off-screen just grinning at her.

The small amount of technicalities I can offer: Originally, I wanted her dress to be red, but I could find a combination of shades that would work and any attempts to mix and match colors made it look ridiculous, not to mention they wouldn’t be colors Amane would be willing to wear. So I went with pink, because pink and blondes kinda go together for some strange reason. To keep part of her personality in the outfit and pose, I allowed her tattoo to show and let her wear her typical arm bands. I improvised with her hair a little bit and added a couple things I’d never drawn in it before (although you haven’t seen any picture from Amane before, unless you’d seen my gallery a LONG time ago, I have drawn her before). This picture was actually drawn in May of ’09, so it’s actually rather old, but I decided I liked it and wanted to color it, so I did. I colored it last month.

I rather proud of this picture and very glad I decided to color it. I think I like this better than the picture of her wedding dress (which will be posted after this one) as far as Amane goes. I think it’s the hair. I like her hair better here. But you guys won’t understand that until I get to it, so I suppose I’ll stop ranting now.

I would love to see that kind of dress in real life! I love the bulb in the middle of cleavege area- it seems more fashionable than the normal V-shape.

Thanks ^^ I think it would make a good prom dress in real life :D And I'm glad you think it's more fashionable--my attempts at fahion and design aren't usually complimented :D

This is so cute!