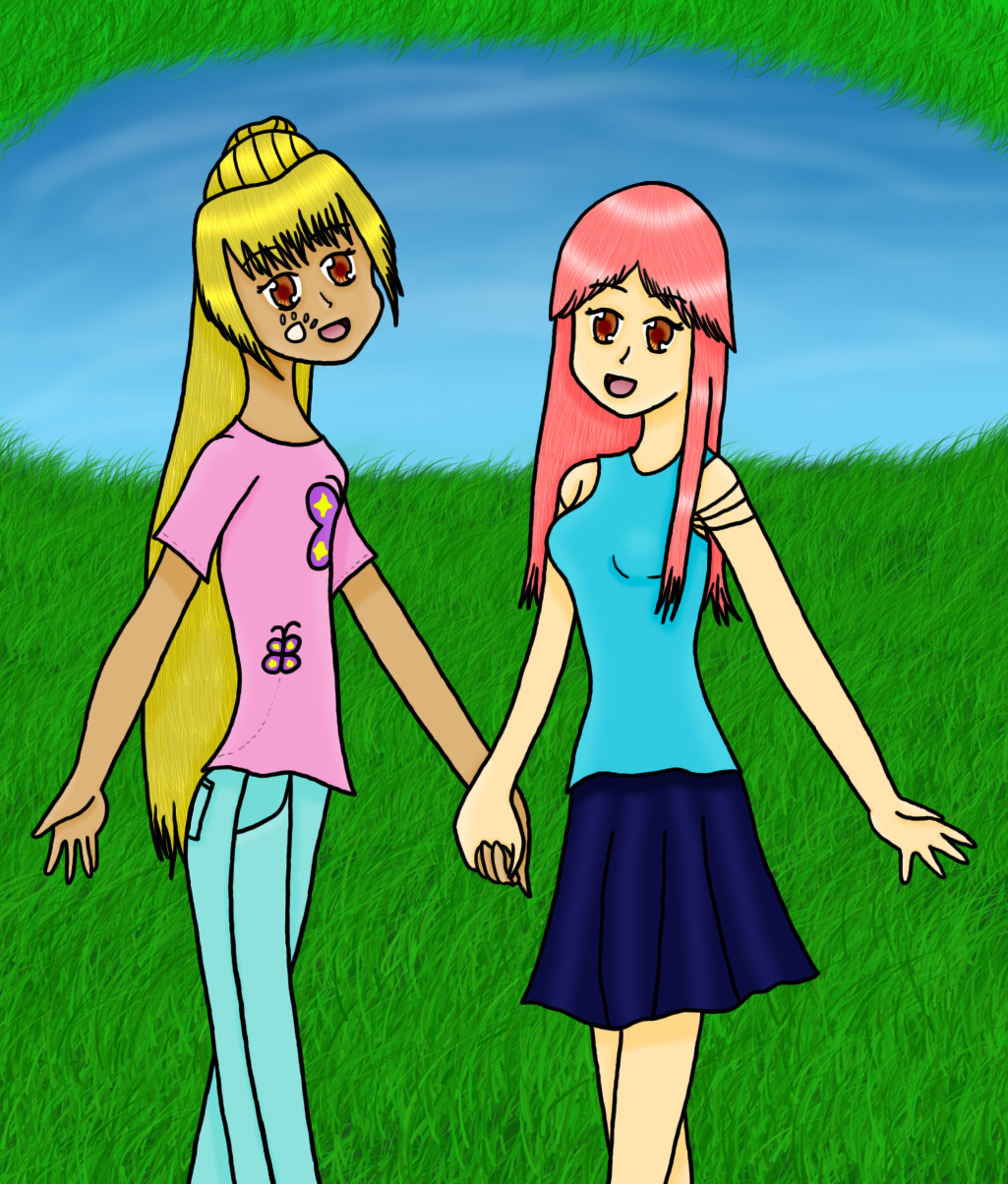 *jumps up and down* Out of all my recent pictures, this is probably one of my favorites. And it’s not YuGiOh art! Sure, it’s still OCs, but it’s not YuGiOh. That should make people feel better, right? Probably not ‘cause no one cares.

For starters, I guess I’ll let you know that I drew this last month and colored it a couple days ago. Second, I’ll introduce the characters. On the right we have Orenji Ringo in human form! I hope you all remember her. If not, look up her the only picture I have of her in my gallery. On the left is a new character (well, new to you guys anyway) who doesn’t belong to me. That’s right, folks, this is Kurimu Kogaya! She’s a polar bear mew who belongs to my wonderful bff, Wulf-chan. She’s a little taller than Orenji and she’s very slim. Orenji, on the other hand, has a fairly large chest for a girl her age and is rather average in height (for girls, anyway). Ryou Shirogane is Kurimu’s love interest and she has two brothers, a younger one with whom she lives and a fairly unknown elder one who left forever ago. That’s really a contrast to Orenji who’s in love with Kishu and has two younger siblings (a boy and a girl) who happen to be twins. Just so you know, the information concerning Kurimu might be slightly incorrect since it is rather old and just out of my memory, so I don’t know if Wulf-chan’s done revisions on her story or not. For now, this is as accurate as I’ll be able to get. Also, while not from the same story (except in RPs), Kurimu and Orenji really are best friends.

Alright, now for the technicalities. I designed Kurimu’s outfit based on what I know of her likes and dislikes and what she’d be willing to wear. Orenji’s wearing her signature outfit. I like the black threads around her arms. I think they look cool. I think it’s really cool that Orenji and Kurimu share the same eye color. That’s totally a coincidence. I also find it funny that their skin colors are totally different.

I am very proud of how the hair and eyes came out. I don’t think my coloring style for them is perfect and it can always improve, but I think it looks really good. I will eventually learn how to color folds and clothing properly. I think I do alright with what I know for now, so that’s okay.

Like with the previous couple of pictures, I’ve been trying for more realistic backgrounds. They’re near a pond in a park somewhere. I did a cool effect with grass by making it smaller the further away it gets. I’m slowly learning perspective and I will eventually get there.

I’m sure you’ve all seen the original picture for this pose. I’ve never found the original (a friend of mine gave me an edited version, which is the one I referenced), but I know there’s a base somewhere on DA and lots of people have both used the base and the pose, so yeah. Just throwing that out there.

I suppose that’s all I really have to say. Um, I can tell you here and now that besides my YuGiOh OCs, Parvani (Pokémon OC), Sakura (Mermaid Melody Pichi Pichi Pitch OC), and Orenji (Tokyo Mew Mew OC) are my three favorites. I really like the idea of my HP OC, but the three mentioned are the ones I’m really attached to. All three are fun to draw and I adore coming up with backstories and such for them. Just sayin’.

And now I shall leave you. I hope you would please leave me comments and favs—they make my day!

I love the sharp hair detail in the lineart! Nice work!

Thanks :D I've tried to keep my hair coloring style relatively realistic and that's the only way I know how.

Thanks ever so much :D

Thank you very much ^^ I'm glad you think so.