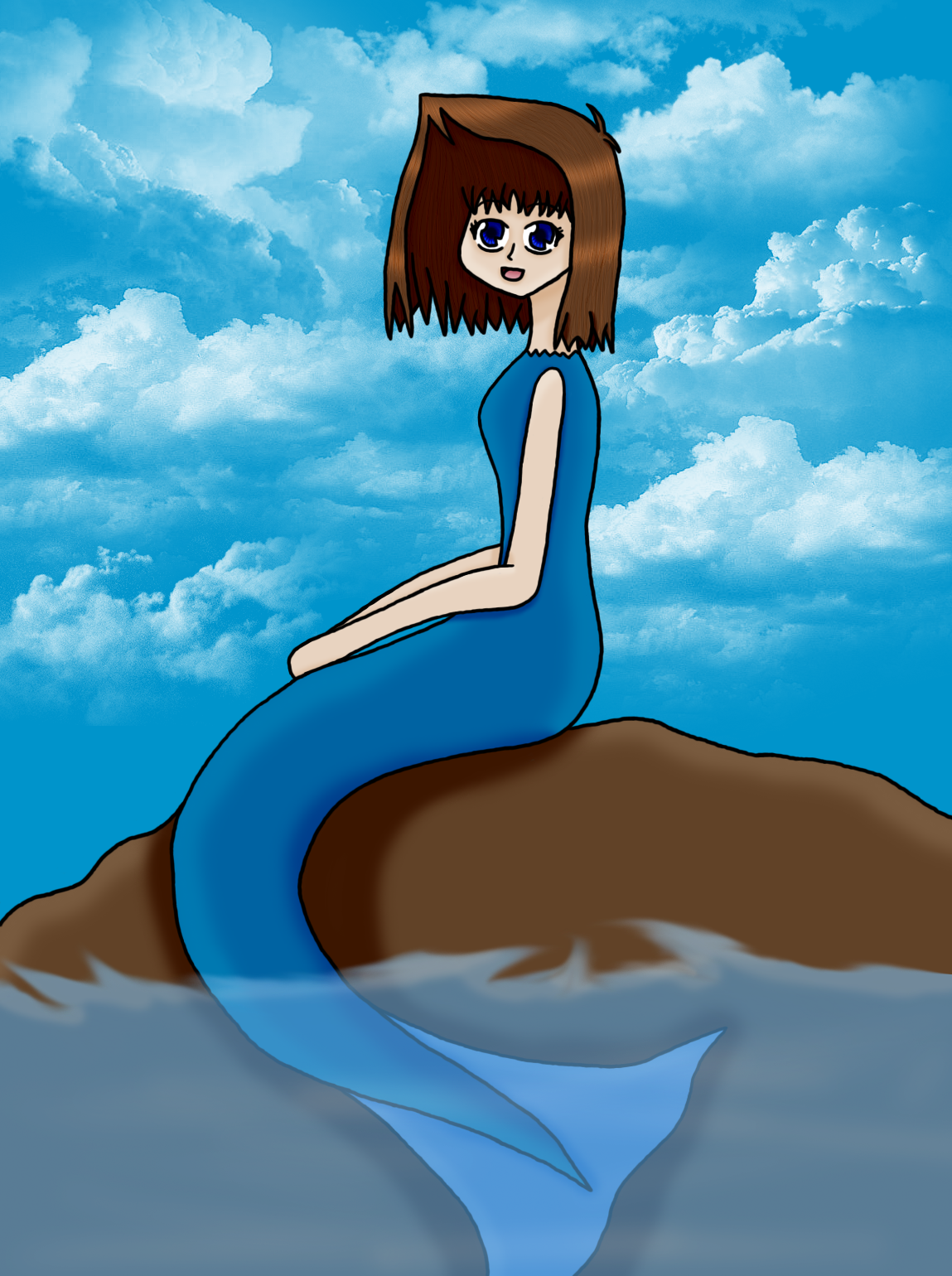 Hello everyone! Guess what I have for you! CANON ART!

It’s been so long since I last drew fanart. I can’t even remember when. I could look it up but I’m too lazy.

Well, about a month ago, shortly after I returned home from my vacation, I decided I wanted to draw something to follow up my last mini spree (see previous three pictures, minus the contest entry). So I sat down to draw. At first, all I knew I wanted was a different pose than what I normally did. I drew the neck, bust, stomach and lower back and got to the butt. I didn’t know where to go from there. I tried a couple of leg poses. They didn’t work for me. So I said, “What the heck,” and slapped down a tail. I put on the tail fin and drew the arms, then sat there. Who was I drawing? Obviously it was female, I knew that much, but which female? Since I didn’t want to have to look up too many references, I considered one of my own characters. But since it was shortly after THE BEAST, I decided against that. So I went with the only canon girl I know how to draw without too much trouble, Anzu.

Well . . . I had to look up a screenshot for her from a side-ish view like that since I’d never done it before. But that’s okay. References for characters you can’t quite draw are just fine. The rest of this picture came out of my head, woo hoo. I’m such a cheater, though, using a mermaid tail to get out poses. And I hid the hands again. *bristles* I hate hands XP

Like with my previous Merpeople pictures, I use the full body look, which is why the top of the blue is jagged; they’re supposed to represent scales.

Anyway, I had fun coloring Anzu, though I don’t think I did the hair strands quite right XP

My favorite part of Anzu is her eyes. They came out BEAUTIFULLY. More beautifully than I expected.

And now, the background and such. The rock probably should’ve been more of a gray than a brown, but whatever. A brown rock is what we have XP You should all recognize the clouds in the background. It’s the same cloud brush I’ve been using since forever (alright, only the past couple of months, and I’ve only used it on six pictures, but close enough XP). I was having a bit too much fun with it, and I think I made them go a bit too low XP

But what I really want to talk about concerning the background is the water at the bottom. When I first drew this picture, I knew I’d have to do water down there somehow, and I had no clue how. When I got to it in coloring, I created a new layer, then stared. How was I going to do this? I eventually got around to using the box tool and created one at the bottom, chose the same color for both colors, grabbed the gradient, lowered the opacity until the color looked good enough, then filled the box. I deselected the same box, took the smudge tool, and tried to make it look like waves splashing again the rock. *shakes head with a sigh* I obviously am a beginner at this XP After that, I locked the layer, grabbed the paint brush tool, picked one of the softer settings, lowered the opacity, tried to make foam, then took an even softer setting with the same low opacity and tried to add foamy waves-ish to the water. It’s rather difficult to see, though XP But I tried. How’s my first attempt at such types of water?

I think this is one of my favorites of my work so far—I really like it. And I hope you guys do too.

Before I leave you with the copyrights, I should probably tell you about the title/some sort of scenario for this picture (I got so excited in talking about my process that I neglected the story XP). Anzu is waiting for her prince to come find her. I leave it up to your imagination as to who that prince is. I ship Peach (AnzuXYugi), Azure (AnzuXSeto), Vex (AnzuXBakura), and Manipula (AnzuXMarik), though I’m slowly coming to like Thorn (AnzuXYamiMarik, and my feelings for this pairing are really complicated XP), Persevere (AnzuXDuke), and Host (AnzuXRyou).

Anyway, comments? Please? You know you want to give them to me.

She looks very pretty here~!I agree,nice work on the eyes.^^

Thanks so very much ^^

So sorry for the late reply ^^0