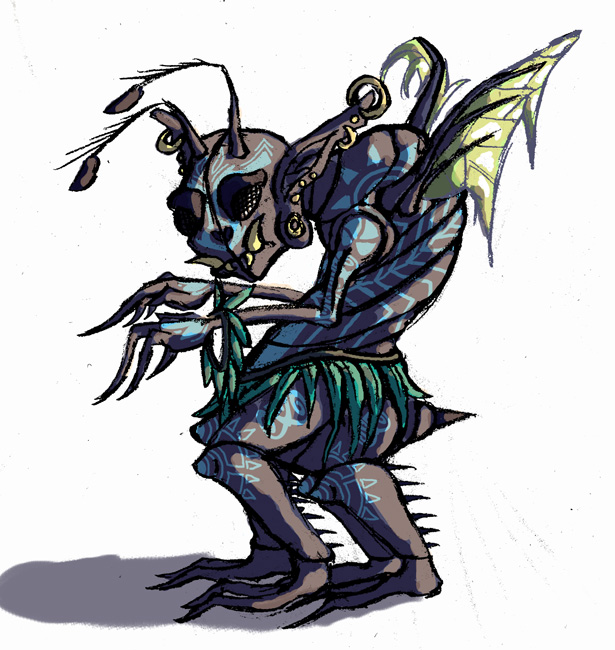 "Pixies are to fairies what goblins are to humans. However, their habits are far worse than goblins. They're known for being violent, crude, and even cannabalistic- often torturing their victims to death before eating them. What little culture/religion they have as a society is based completely on death and blood sacrifices, most of which are made to and on a specific tree that grows beside the shore of Lake Qureis. They live as nomads in the woods, building structures out of leaves as needed, and travel in small, family groups, consisting of anywhere from 7 to 10 individuals. They constantly quarrel with other clans over territorial rights, females, and food sources. Squabbles tend to arise from within their own group as well.
Pixies are usually between 4 to 6 inches tall, with twisted, insect-like bodies and stunted wings- very few of them actually fly. Their faces are brutish, with compound eyes and an oversized jaw full of jagged teeth. They're skin is usually blue or green in color- a form of camoflauge, as they actively hunt large insects and small mammals. Pixies lay eggs, like insects, in clutches of three or four, and usually hide them under leaves or in crevaces of bark. For all their ruthlessness, mother pixies do stay to guard their eggs, and nurture their children until mature."

What an awesome little bugger! :D (Eh? get it? BUGGER? ... I'll stop xD), Anyways, this has got a very cool design and look to it.