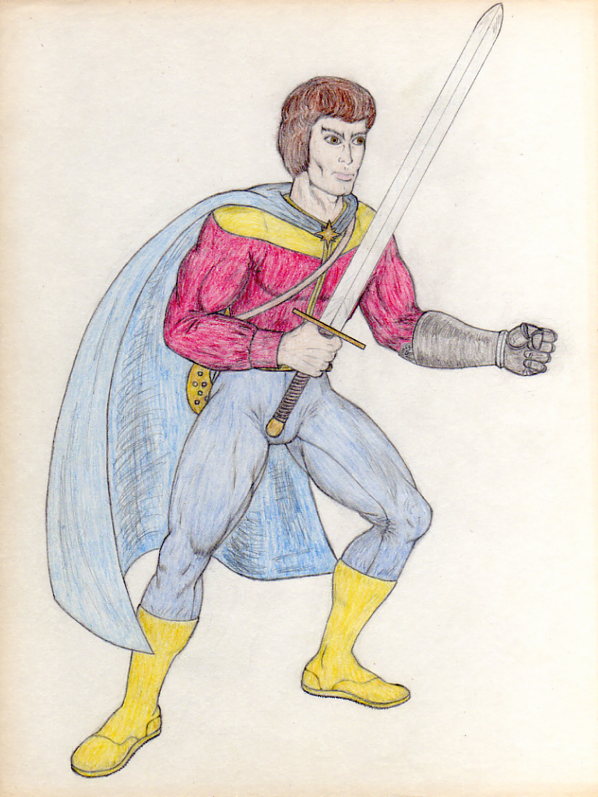 This my character, Dandar Stormphoenix, from my old D&D games. I apologize for the crudeness of the picture, but it is at least 25 years old and in pencil. I no longer have the skill to ink it. My daughter, FudgemintGuardian, suggested I post it, so here it is. He is a 9th level paladin. His sword is the Doric Silencer, and the thing on his left arm is the War Gauntlet. 1,000,000 quatloos to anyone who can tell me where those come from. The thing on his back is the Golden Lyre of Apollo. His best friend is an evil red dragon (hard to explain), and his favorite saying in the right situation is: "Fire? The phoenix is reborn again in fire, and I am the Stormphoenix!" Favorite DM expression regarding him: "He's actually attacking that? I never really thought anyone would. Um... I have to give it hit points now."

The style is dated but all in all it's skillfully drawn. It give a static impression though, much like an action figure as opposed to a person. Soften the stance and come a step away from the picturesque image in your mind of a character, allow his cape to fall and hang from him and loosen the fit of the clothing, spandex hugging every contour isn't completely accurate anyway, and you'll start to grasp a more amicable style to which people can better relate.

I suppose the style would be a bit dated, since the picture is 25 years old. The picturesque image was intentional, as he is a superpowered paladin. This also explains the tightness of the clothes, since I was going for a superhero kind of look. If you'll look closely, you will see the shirt isn't quite as tight as the pants. I do agree with your general assessment though. I got better than that later on, but I haven't drawn in years, and my hands don't work as well as they used to. Thanks for the advice, but I probably won't be doing anything new, though my daughter keeps pushing me.

haha, very good. the character does look like its 25 year old. i like the yellow effect that happens to the paper after a long time. very well done.

Thanks. It's his hair, right? I keep thinking of Michael Knight from the old Knightrider show when I see it. I wished my hands worked well enough to do more like him, but I do still have some old stuff I'm going to post.