In Reality They're Crooks PT1

In Reality They're Crooks PT1

In Reality They're Crooks PT1 by Midnight_Chaos 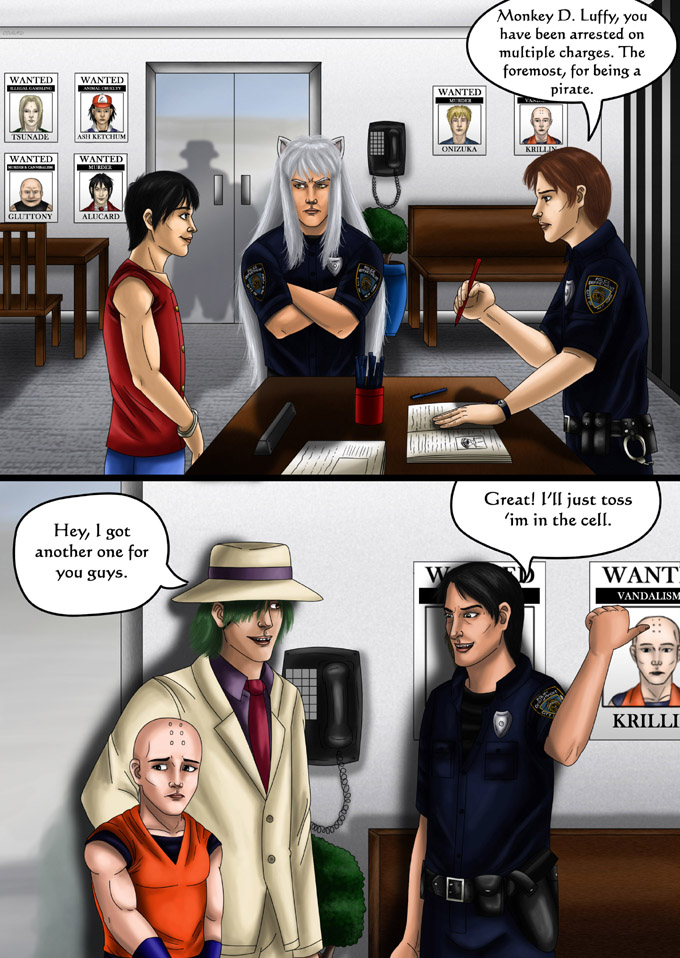 Madman "REEL-er Anime" Art Competition entry from 2010. We had to draw Anime characters in realism, or illustrate them living in "real life".

This "real life" scenario is set in a New York Police Department, as both Ryo and Dee (from FAKE) work there in the manga. Also, Krillin has been given a nose, because he looked off without one in realism style XD

In response to Madman's "what would our heroes be doing in the real world", the fact is a lot of them would probably be in trouble. Inuyasha is what started this picture, after wondering where exactly he'd fit in in modern day society. He was initially hunted down by the US forces for his half dog-demon blood, but after negotiating for his life, agreed to work as a sniffer/police dog in the New York Police. There, he works under Dee and Ryo (FAKE), hunting down criminals and sniffing out illegal substances.

Sven (Black Cat) the bounty hunter, occasionally drops by with a wanted criminal, and today he has Krillin who is wanted for Vandalism (blowing stuff up unintentionally) and public nuisance (fighting suspicious characters in the street).
Luffy has also been arrested, on these charges: Pirate, harboring dangerous individuals, failure to quarantine animals and suspicious plants, carrying dangerous weapons, illegally entering waters/countries, piloting an unregistered ship, physical violence against the police prior to arrest and harboring a corpse. Geez, seems like Luffy might be in there for a while O.o

wow that is funny

Thank you very much :D

but what did ash from pokemon do, Pokemon Abuse

Yes, you're spot on! :D He was arrested for Pokemon/Animal abuse.

Well it would be the only choice since that is his only hoby unless he used team rocket as wepon i would highly doubt that though. but you should have had this one anime i read this guy named shigure just for being a pedofile and molesting children such as highschool girls

Hahaha, yes that is very true! Ash really doesn't do much else, does he XD
I've never heard of that anime before, but that Shigure sounds like a nasty character. He would've gone up on the wanted wall for sure D:

well that is true and that man is also like 30-40 years old, but the thing is with ash that would be like ash from the abridged sirese

I've never thought about how old Shigure is, but if he's that old, that makes him slightly more creepier O.o Wasn't he kind of 'hitting on' Tohru at some point? D:
I haven't seen the abridged series of Pokemon, so I'm not really sure how Ash is portrayed in that ^_^;

i think about episode 10 maybe

Ah, ok :) I should probably try and rewatch the anime sometime. It was a good series :) It's a pity the anime didn't go as long as the manga though. The manga had so much more plot to offer :(

well yeah just look up Fruits Basket Episode 1 and you can totally tell that is what he thinks but the whole show is sad ince you hear the whole plot. Worst part is I like sappy animes yet i play Amnisia.

OMG, you mean Fruits Basket? Yes, I totally know who you're talking about now. I watched the series a while ago, but I'd forgotten about Shigure being a pervert. Wish I'd remembered him when I did this picture; he would've made a great suspect on a wanted poster.