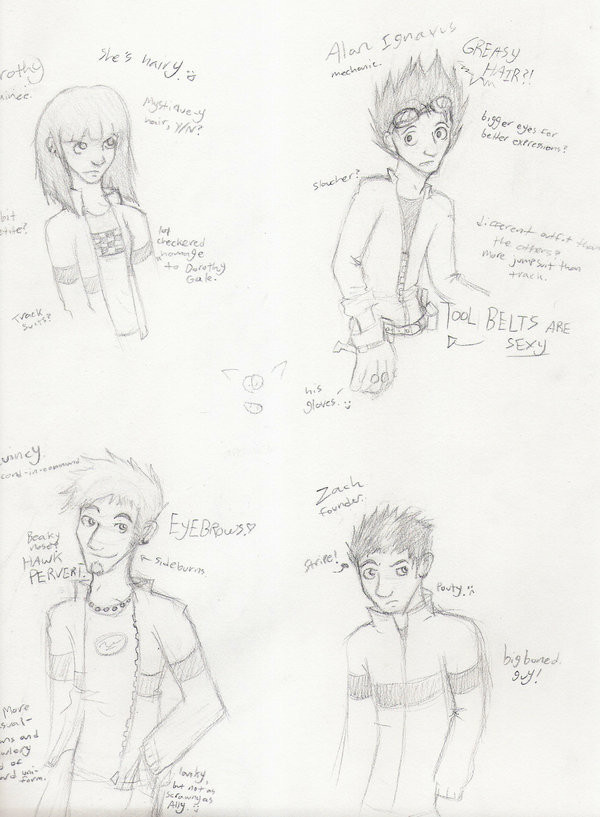 Okay, so I lied about Jack Spicer.

Description yoinked from the dA submission!

Some sketches of the Starship Exterminator crew I did a while ago for ~jimmyeatsyourworld's Ozine thinger.

I feel guilty for not working harder (or at all) on the pages so far.

At any rate, here's a quick rundown of what I learned about the main characters from her.

Dorothy, trainee: Earth girl, pure human blood, obsessed with the Wizard of Oz, voice of reason. "She might be a lesbian. I'm not sure."

Alan, mechanic: Ozian, half-human(?), has several different phobias, especially greasy hair, was adopted, was once mistaken for a girl.

Quincy, second-in-command: Pure Ozian, thus has very, very brightly coloured hair/eyes, suffers nervous breakdowns due to his uncertainty of his sexuality, still flirts with everyone anyway.

Zach, founder of Starship Exterminators: Ozine with traces of human blood, grew up on a farm, family was killed by Ozine worms, swore revenge and founded the exterminators. NO SENSE OF HUMOR, APPARENTLY.

That's it, I believe. Tell me if I got anything wrong, Jimmy.

Characters, plot, storyline (c) My genius sister~
So technically, this IS fanart! :D

lol, grammer fail on my part. xD I meant he's scared /of/ greasy hair. (failfailfail ohman I'm too lazy to fix that.)

Haha! Now it makes sense! XDDD But you can blame Komo, because I didn't notice that until she said, "Greasy hair?"